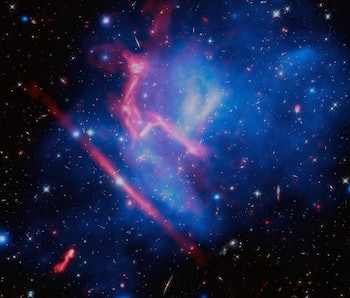 A team from the University of Massachusetts Amherst, led by astronomy professor Min Yun and senior undergraduate Kevin Harrington, has taken to calling these galaxies “outrageously luminous” — not an official scientific term but super apt regardless — in their report in the Monthly Notices of the Royal Astronomical Society. The team estimates that these galaxies are about 10 billion years old and formed an estimated four billion years after the Big Bang.

“The galaxies we found were not predicted by theory to exist; they’re too big and too bright,” Yun says in a press release.

To search for these massive star clusters, the team used a 50-meter diameter Large Millimeter Telescope, which is is located at the summit of a 15,000 extinct volcano in Puebla, Mexico. The telescope is considered the largest, most sensitive single-aperture for studying star formation in existence. They also collaborated with NASA and the ESA to use the Planck satellite, which can detect the glow of the Big Bang and cosmic microwave background.

The researchers theorize that one reason analyses have revealed these galaxies to be so bright is because they were created by an “amazingly high” rate of star formation. While the Milky Way is thought to produce only a few solar masses of stars per year, these galaxies seem to have formed one star every hour.

Gravitational lensing, a phenomenon that happens when magnified light passes by massive objects, is also thought to be why these look so bright. In reality, these galaxies look to Earth-bound astronomers probably 10 times brighter than they actually are. Regardless, they are brighter than anything astronomers have seen before.

Besides looking really cool, the team behind this research hopes that by studying these eight galaxies, they can gain a better understanding of how matter collects and forms a galaxy. This, in turn, could explain some of the mystery of what the Universe was like in its earliest years.

“Knowing that they really do exist and how much they have grown in the first four billion years since the Big Bang helps us estimate how much material was there for them to work with,” says Yun. “They suggest that this process is more complex than many people thought.”