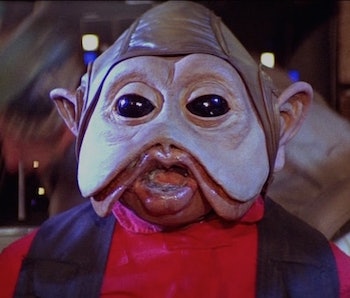 Everyone’s favorite Sullustan in the Star Wars universe, Nien Nunb, might be joining the Rogue One story, if the new Star Wars: Battlefront art is any indication. Nunb is perhaps best known for his heroics as Lando Calrissian’s co-pilot, but it looks like he’s maybe joining Jyn Erso in taking up arms on the ground in the new images from Battlefront.

The newest trailer and artwork for Star Wars Battlefront Rogue One: Scarif reveal some familiar Rogue One faces, but this is the first time we’ve seen a Sullustan appear in the context of Rogue One. And while we can’t be totally sure that this is, in fact, Nien Nunb, his history with the Rebel Alliance and his future work fighting against the Empire suggests that it very well could be.

In the time of the Galactic Civil War, Nunb used his ship and smuggling expertise to aid the Rebellion. While much of Nunb’s involvement took place after the Battle of Yavin, it’s entirely possible that Rogue One could fill in some gaps in Star Wars lore beyond just the pre-A New Hope crawl, and we might even get something of an origin story for Nunb that will set up his later appearances.

The Sullustan we see in the Battlefront art could also be another Sullustan and not Nunb, of course. But it’s worth noting that in Nunb was responsible for transporting refugees in his ship, the Mellcrawler, for Princess Leia. The call for Nunb’s help wasn’t originally made by Leia, though; it was made by Evaan Verlaine, a Rebel pilot who was rumored to appear in Rogue One, though later was revealed to be a character Zal Dinnes.

Nunb also fought with the Resistance to destroy Starkiller Base in The Force Awakens, meaning, if he’s in Rogue One he’ll be (probably) the only Star Wars character with back-to-back appearances after The Force Awakens.

Rogue One arrives in theaters December 16.

More like this
Gaming
7 hours ago
Nintendo Direct Mini is everything wrong with game showcases
By Willa Rowe
Gaming
10 hours ago
How Ace Attorney spawned one of the most enduring character ships ever
By Hayes Madsen
Gaming
6 hours ago
10 intriguing Switch game reveals from the Nintendo Direct Mini
By Robin Bea
Related Tags
Share: