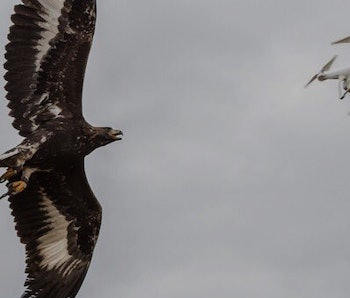 Eagles are fast becoming the anti-drone tool of choice. The French Air Force announced Thursday that it has trained eagles to both take down rogue unmanned aerial vehicles (UAVs) but also to spot them before their handlers do. The eagles won’t just attack drones; they’ll hunt them.

The French Air Force said that the eagles will offer new ways to respond to terrorist threats. They are being trained as part of an anti-drone program called MILAD that will also use more conventional tools, like jammers, to take down drones.

The Local, an English-language French news outlet, reported that the French Air Force “sees eagles as the most effective and least expensive way” to ground any suspicious drones. That’s why it started training this group of eagles over the summer.

France isn’t the first to use eagles against UAVs. Dutch police are pursuing a similar program, and British prisons might do the same to stop contraband smuggling via drones.

Not that all eagles need to be told to hunt UAVs: Giant wedge-tailed eagles in Australia have caused more than $100,000 in damages by preying upon a mining company’s surveying drones. They weren’t trained to do so; they decided to reclaim the skies themselves.

We made a microwave gun to disable UAVs — nature made a flying predator that hunts drones for sport. The French Air Force will see which is more practical when this first convocation of eagles is cleared for duty in the summer of 2017.