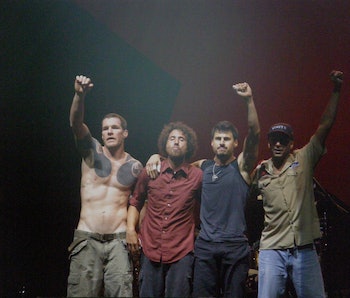 In light of the recent Donald Trump win, protests have broken out around the country in hopes that it will prevent Trump from actually becoming president. Although it is a very lofty goal because it would mean a complete restructuring of our electoral system, people are still making their voices heard, and calling for change.

And as long as there has been political protest, there has been protest music, calling for a reform to political policies, and highlighting the flaws in humanity. This music can often be uplifting, and provide comfort for the many protesters, while also spreading their message to wider mainstream culture. Here are 15 iconic protest songs and the struggles they sprang from.

The man who actually wrote the song, Abel Meeropol, was inspired to write the song after seeing a photograph of a lynching of a Black man. It was originally a poem, and the lyrics never mention lynching, but the imagery is very clear. The song went national when Billie Holiday performed the song, and it was performed again by Nina Simone, and then sampled by Kanye West on “Blood on the Leaves”.

Bob Dylan is a noted activist, and wrote this song about the death of Medgar Evers, the first state field secretary of the NAACP in Mississippi. He worked to investigate crimes against Black people, and organized voter registration events and economic boycotts. The song is directed at poor whites, and reminds them that they are only pawns in the rich, white person’s scheme against Black people. Byron De La Beckwith, the man who assassinated Medgar Evers, was not convicted of the crime until 1994, 31 years after the murder.

Sam Cooke wrote this important song a month or two after he was turned away from a Holiday Inn in Shreveport, LA. The song scared him at first because of its ominous tone. It has since gone on to be a song of hope for millions of people.

The war in Vietnam began in 1954 following the rise of the Communist Party in the area. Americans were drafted to fight in the war, and faced persecution if they refused, i.e. Muhammad Ali. “Eve of Destruction” addresses the war in Vietnam, racism, and injustice in the United States during the highly volatile era. Many radio stations refused to play it because of its anti-government lyrics.

John Lennon’s infamous call to peace was also in response to the Vietnam War. By the end of 1969, 48,736 U.S. troops died there. It took another four years before the U.S. withdrew, at which time the casualties had reached more than three million people, most of them Vietnamese civilians.

At the time, Bob Marley had been diagnosed with cancer, and was dealing with his own mortality. The Cold War was still happening, and people had a lot of fear over the use of atomic bombs. The song urged people to not fear atomic energy and emancipate ourselves from “mental slavery”.

This song is the first rap song to provide some sort of social commentary about life in the inner city. During the Reagan era, poor areas, like the Bronx, were left in abysmal conditions. Although it was not written by Grandmaster Flash, he and the rest of the group were the first rap group inducted into the Rock and Roll Hall of Fame.

The song was created for Spike Lee’s Do the Right Thing, and was based on all the racial and economic tensions between neighborhoods that was occurring in New York City at the time. The song fits perfectly with the movie where we see the tension culminate in the death of one of the characters. R.I.P. Radio Raheem.

Growing up in Los Angeles, the rap-metal band, Rage Against the Machine saw their fair share of violence. Police violence was becoming much more well known and spoken about due in part to N.W.A, the Rodney King beating, and the L.A. riots. Rage Against the Machine wrote “Killing in the Name” as a giant “Fuck You” to our government and its entities.

2Pac is one of the most political rap artists of all time with records like, “Keep Ya Head Up” and “Brenda’s Got a Baby”. This song was released in 1998 following Pac’s untimely death. Pac speaks about the drug war, police brutality, and government injustice. 20 years later, the song is still extremely relevant. Despite the progress that we have made, there is still so much change that needs to occur.

Bruce Springsteen wrote this song following the shooting death of Amadou Diallo, an unarmed Guyanese immigrant who was gunned down in his Bronx apartment building by officers who believed that his wallet was a gun. Following the acquittal of George Zimmerman in the shooting death of Trayvon Martin, Springsteen dedicated the song to Trayvon. The song was originally boycotted by policemen, citing that it was anti-police. Some things never change, huh?

Eminem wrote this song in response to Bush, the 9/11 terrorist attacks, and the war in Iraq. Eminem was extremely anti-Bush, and felt that the Iraq War was similar to the Vietnam War: a waste of human life for no reason.

Another anti-Iraq war song, Rise Against tells the story from the perspective of a soldier. He is enticed to join the military for the benefits, but later has to deal with the repercussions of taking another’s life, and seeing other people die. It is a powerful song about the horrors of war.

“Alright” has become the anthem for the Black Lives Matter movement. It is a proclamation that no matter what we are put through, we will be okay. It won the Grammy Award for best rap song and best rap performance.

T.I. has been one of the most outspoken rappers on the topic of police brutality. His video for the song “Warzone” switches the races of the people involved to highlight just how problematic the deaths of these innocent Black men were.

More like this
Entertainment
5.12.2022 6:34 PM
The secret reason Christopher Walken was destined to play the Emperor in Dune: Part II
By Ryan Britt
Entertainment
5.14.2022 10:31 AM
Obi-Wan Kenobi could bring back an iconic Star Wars character
By Dais Johnston
Gaming
5.3.2022 11:00 AM
Spotify Island brings a “paradise of sound” to Roblox players
By Mo Mozuch
Share: