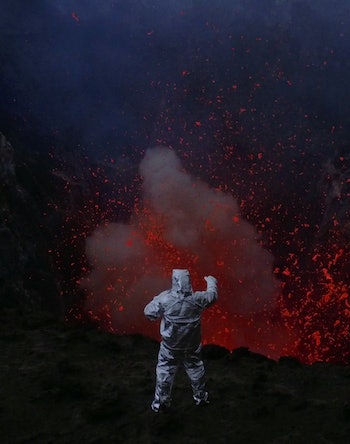 Volcanologist Clive Oppenheimer met famed filmmaker Werner Herzog on top of an active volcano in Antarctica. The setting could not have been more dramatic: Twelve thousand, five hundred feet above sea level, the summit of Mount Erebus is one of three places on the planet where you can look down into a pit of hot, churning magma that bubbles up from the depths of the Earth. And right there, in the thin, cold air, a friendship began.

Now, ten years later, Herzog and Oppenheimer have released a Netflix film of their own, Into the Inferno, that takes viewers to some of the harshest places on Earth to look into the belly of the beast. It’s full of amazing footage of active volcanoes, sure, but more than that it’s a story of relationships — with friends, with communities, with the natural world.

Oppenheimer told Inverse about his own journey into the inferno, and what volcano mysteries he hopes to solve in his lifetime.

Firstly, it’s a professional relationship. A lot of my work is field-based. I don’t spend much time at all in laboratories, and I’m not sitting in front of a computer all the time, writing code to model volcanic processes. The main thing I do is go to the volcanoes, and part of that is working on active volcanoes where I’m setting up equipment to measure the gas emissions or to use infrared imaging to look at a lava lake and collect nice sets of data where we try and probe how volcanoes work.

Another part of it is working on old volcanoes — those volcanoes that have already erupted in the past, in particularly significant ways and try to piece together in a more forensic way, what those eruptions were like. So, my relationship is quite a professional one At the same time, I do have an emotional connection, which is [when] I’m not in an office, when I’m out in the wilderness, whether it’s on a volcano in Antarctica, or in the desert of Sahara or in the tropics of Indonesia or Vanuatu. It’s something very uplifting to me to be in the natural environment in that way.

Do you think the riskiness of volcanoes is part of what attracts scientists to want to get close to them and study them?

The riskiness of volcanoes, and how that relates to other people is definitely a drive for a lot of volcanologists. I think a lot of us are motivated by using the science in an applied way to protect people who are threatened by volcanoes. But personally, I’m not an adrenaline junkie. That’s not the reason I work on active volcanoes. I certainly find the spectacle of looking at a lava lake — that can be very mesmerizing — but I’m not really a risk taker. I think when I hit 30, I kind of realized that I am a mortal; when you are a teenager, you don’t really think about these things.

Early in the film you speak with a chief in Vanuatu who says he’s very surprised that foreigners want to come and study the volcano near his village. Does his surprise come as a surprise to you?

No, I do understand it. We take very seriously the belief systems that people have in the societies living on volcanoes because they tell us about past events that we didn’t know about. There are myths, and stories, and traditions about battles between the great warrior and the spirits of the underworld — the ground caves in and the rocks are thrown into the air. These are clearly descriptions of past volcanic events that we can then identify scientifically.

It’s very important to understand what people believe when you want to use the science to protect populations. You can’t just go in as a scientist and say ‘My readings tell me you need to evacuate now.’ You have to be able to communicate with them, understanding what their needs are, what their lives are like, what their beliefs are.

When he said ‘I can’t understand why you would want to come here,’ in some ways he’s quite right. Why do I need to study a volcano? Why would somebody want to know how magma is transported in the Earth’s crust and why it erupts is in a particular way, rather than in another way? When you’re a scientist, you have gone down such a narrow path in your life — studying, studying, studying, getting into something ever, ever more esoteric. I can totally see where he’s coming from. If I had a bit more time, I’d have tried to explain to him.

What would you tell him?

I’d probably have to get back to basics and review some of the aspects of global tectonics and the Earth’s interior and why the Earth is hot inside, in order to see whether we could end up understanding each other’s worldviews.

What’s the state of volcano science today? Have we pretty much got them figured out, or are volcanoes still full of mystery?

It’s still full of mystery. It’s always quite humbling to me when I look at the scientific journals from a century ago — the scientists then were asking the same questions that we’re asking now. There are a number of reasons for this. One of course is that the thing that we’re studying — a lot of it is going on below the ground, so we don’t have direct observations of it, we have to infer processes from things we can reproduce in a computer model or with an experiment in a laboratory, or through studying the rocks, and what observations we can make from the Earth’s surface, with seismometers and so on.

At the end of the day, we’re dealing with a substance — magma — which is incredibly complex. It has three phases of matter, it has solid crystals, it has a liquid part and it has gas bubbles. And its behavior is changing all the time. As it rises to the surface, those gas bubbles are getting bigger and taking up more of the volume of the magma. So the physical and chemical properties are changing sometimes on very, very rapid timescales.

We do now have fantastic tools to study volcanoes, whether it’s satellites using remote sensing from orbit in space looking down and measuring the emissions — measuring the changing shape of volcanoes as molten rock rises into them.

How much better are the modern tools compared with, say, what you can observe with the naked eye?

Radar satellites can observe volcanoes around the planet, so we can study volcanoes that are not — like Hawaii — bristling already with instrumentation, but maybe a volcano that’s in the middle of the Atacama desert in Chile or Bolivia. Satellites can see whether it’s bulging or not. This is a bulge that would not be perceptible to anyone on the ground — you’d be looking at movements of a few inches perhaps over length scales on the ground of several miles, so very, very subtle signals can be picked up by the instrumentation that we have now.

Measuring the gasses that come out of volcanoes — that’s something that I worked on a lot. We use spectrometers. We can measure very precisely and in very high temporal resolutions, making measurements every second of the chemistry of the cocktail of gasses that volcanoes spew out.

What’s a major volcano mystery you would like to see solved in your lifetime?

One is kind of a personal one because it relates to some observations that I made on a volcano called Erebus, where I met Werner ten years ago. It has been studied since the late ‘60s, early ‘70s and no one had ever noticed that it has a 10-minute cycle. The lava lake goes up and down by 10 feet or so every 10 minutes. The gas composition changes subtly, but quite noticeably, on that same timescale, and the gas flux is changing as well — the amount of gas that’s coming out. It’s like a heartbeat — it must be telling us about how the volcano works, why it erupts in the way it does. Something very fundamental about the fluid dynamics, a lot of the physics, the chemistry of this flow, this complex material called magma. I don’t have an explanation for it.

Do you think of volcanoes as living things?

I think of them as life-giving things. I find it quite credible that volcanism has played a role in the origins of life, whether it’s in the exotic, hydrothermal environments such as we see on the sea bed today, where there are hot releases of fluids that are charged with minerals and there’s a whole ecosystem down in the deep ocean in complete darkness. Another idea is that lightning in volcanic clouds is also capable of synthesizing perhaps some prebiotic molecule.

Also, of course, we’re breathing an atmosphere that is the result of exhalations from volcanoes over geological time. Those volcanoes are out-gassing the lighter elements from the earth’s interior, and carbon-based life has got to come from molecules that have come out of volcanoes. I see us as well as part of that whole kind of biogeochemical cycle of the earth’s engine of life and environment and tectonics.