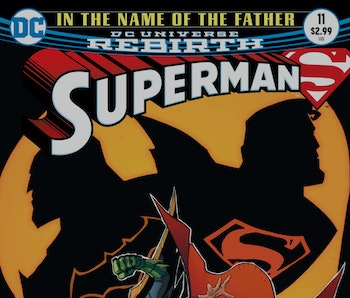 The post-Crisis Superman returned in this year’s Rebirth, and he hasn’t been getting along with New 52 Batman.

Superman #11, published Wednesday, wraps up the two-part story “In the Name of the Father.” The story follows Bat’s and Superman’s sons, Robin and Superboy, as they work together in a boot camp arranged by their dads. As their Super-Sons learn to get along, so do their Super-Dads, entering the new era of friendship co-writers Peter Tomasi and Patrick Gleason promised Inverse.

Until Superman #11, Superman and Batman have been hostile towards each other across Rebirth titles. An infectious fear which plagued DC’s heroes led Superman to pummel Batman in Bryan Hitch’s Justice League, and in Francis Manapul’s Trinity, Bruce’s coldness towards Clark was the catalyst for an evening dinner that’s now morphed into something dangerous.

Superman #11 ends with all four of the Super-Men cutting trees for Christmas, with Clark extending another dinner invite for both Bruce and Damian. “It would be our pleasure … Clark,” Bruce replies.

It remains to be seen how much Superman #11 will resonate through Rebirth titles. Superman was absent in Justice League #9, which is also out this week, and Batman is dealing with his “Suicide Squad” falling apart against Bane in Batman #11. Gleason teased that their friendship may or may not change things outright, but it will definitely be “a bridging” for them. “Whether this goes through to the next arc or how it affects them down the road, we’ll have to see. I’m sure it will.”

Superman #12, which begins the new arc “Sinister Purpose,” will be released December 7.

More like this
Entertainment
7 hours ago
Harley Quinn Season 3 could fix a major Batman controversy, trailer hints
By Eric Francisco
Entertainment
6.27.2022 1:30 PM
17 years ago, DC copied Marvel — and told the worst Batman story ever
By Richard Newby
Entertainment
6.16.2022 11:30 AM
30 years ago, Tim Burton made the sexiest and most sinister superhero movie
By Mónica Marie Zorrilla
Related Tags
Share: