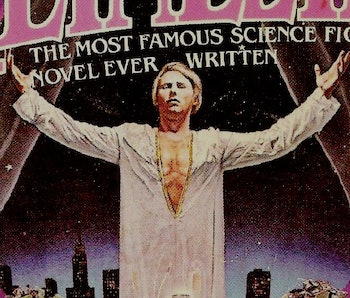 Sometimes called “the hippie bible,” Stranger in a Strange Land presents an almost opposite future world to the one presented in Heinlein’s (arguably) equally famous novel Starship Troopers. Instead of the realistic Juan Rico headed to the stars, Stranger in a Strange Land presents a human raised on Mars who brings his Martian ways to the people of Earth. This leads to a lot of social mores being upended completely. The novel was controversial when it was published in 1961, and remained controversial throughout the ‘60s. The titular stranger/martian, Valentine Michael Smith, introduces a slew of jarring concepts to the future humans of Earth, including (but not limited to) free love, the word “grok,” and cannibalism.

To be clear, Smith’s conception of cannibalism doesn’t involve murder, but Heinlein’s boldness of asserting a completely different set of alien social norms is one of the biggest leap in science fiction of that time. Everyone always wonders what aliens sounded like, and looked like, but what if they were peaceful cannibals?

On the more “free love” side of things, the word “grok” also entered the lexicon thanks to this novel. What does “grok” mean? Well if the phrases “live long and prosper,” “I love you,” and “I dig you,” were all combined into one word, it would be “grok.”

Syfy hasn’t said anything else about the show, so it’s unclear if this would be a miniseries adaptation of the novel (as Syfy did with Arthur C. Clarke’s Childhood’s End) or an ongoing series with different subject matters. With all the sex in this book, it’s shame it’s not headed to HBO.