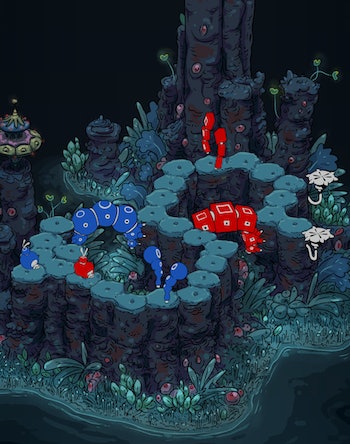 “Ysbryd” is Welsh for spirit or ghost. It’s a word that evokes thoughts of the supernatural, of the unusual, and even of things that are oddball or quirky. When Brian Kwek, founder of Ysbryd Games was forming his fledgling video game publishing company, that was exactly the feeling he wanted his games to inspire.

“I was specifically looking for a word that meant spirit,” says Kwek, “so, in terms of what that meant to video games — and the sense that you could find something, or play a game and experience something that lingered with you well after you were done with it — it left an impression on you that felt really — not just unforgettable — but something that really speaks to you at a spiritual level.”

Taking a look at the projects the indie publisher has been working on latelyly, it’s easy to see how fervently Ysbryd Games has adopted this philosophy. The team has created a memorable portfolio of games, drawing crowds at conventions and gaining a good deal of positive critical attention as well. Games like VA-11 HALL-A, a dystopian bartender sim set in a cyberpunk future, or Masquerada, a sweeping tale of exile and political conspiracy set against a backdrop of Venetian grandeur and powerful magicks, are all instilled with this intangible spirit that draws players in.

This “ysbryd”-spirit was partly inspired by games that Kwek had played leading up to the formation of Ysbryd Games. “I think just growing up and being exposed to the kinds of games that I’ve enjoyed; I’ve always felt that the games that left the deepest marks were ones that really took a lot of time to invest in the world-building, the story, and the characters.”

“We were playing a lot of heavy story hitters,” Kwek says, “like the Uncharted series. In terms of world-building you’ve got Dark Souls, stuff that where you could just play it as a game, but if you scratched beneath the surface you’d find a lot of detail and care that was invested as well.”

Ysbryd’s Business Developer, Cassandra Khaw, had similar inspiration when the company began seeking out projects to publish. “When we started looking for games,” she says, “I was really interested in things like Transistor, The Banner Saga — a lot of the indie titles which focused very largely on narrative … that’s the kind of thing that draws me.”

This sense of wonder and discovery translates to Ysbryd’s unreleased titles, too. She Remembered Caterpillars, a cerebral puzzler developed by Jumpsuit Entertainment, happens to be just one of the projects the team is genuinely excited about publishing.

“A big aim that the development team had was to create this slightly disquieting but beautiful atmosphere,” Khaw says of the game, “where you had these lush hand-painted backgrounds that looked absolutely gorgeous, but at the same time, the longer you stare at the game — the longer you keep watching it — a kind of unease starts creeping up on a lot of people.”

The game does exude an unsettling feel; it’s beautiful, but things begin to feel a bit off. It’s hand-drawn, natural setting is resplendent in jewel-toned mushrooms and the titular “caterpillars” themselves, but it’s also a bit repulsive. Fungal blooms sway in the breeze and unknown organic growths pulse. We naturally pull away from such things. She Remembered Caterpillars captures that characteristic Ysbryd feel. It’s a puzzle game, yes, but it’s also a haunting experience that will linger with you for some time after.

Brian Kwek and Cassandra Khaw, as the core Ysbryd Games team alongside Community Manager Kris Goorhuis, each have their own unique backgrounds in the video game industry that have informed their experience now in games publishing. In fact, their disparate experience as designer and journalist is what actually brought them together.

“It actually started rather interestingly,” Khaw explains. “I used to review mobile games for Touch Arcade ages ago, and Brian is still involved with Witching Hour in Singapore. And they made a game called Ravenmark, and it was this ridiculously in-depth strategic game that was just wonderfully dense for the platform, and I just fell in love with it. Unfortunately, it seems like I was one of the few people who did.”

After Khaw reviewed Ravenmark, Kwek immediately wanted to connect. “We were like, ‘Wow! A Malaysian person reviewed our game! We should find a way to meet her at some point,’” he said. So Kwek and a co-founder made their way from Singapore to Kuala Lumpur where Khaw was living at the time. “We all hung out and had cheesecake,” Khaw quips.

“In 2014, I figured that we needed to start putting fingers into publishing in order to actually get a better picture of what the hell is going on in the industry at least to be more relevant to the movers and shakers, like platform owners like Sony, Microsoft, Valve, and other developers,” Kwek continued.

“I can’t imagine all of the things I wouldn’t know now if I hadn’t taken out all of this work. So when I restarted this project, I thought about who could I work with that would be able to really — who do I know who’s a hustler,” Kwek muses, drawing a laugh from Khaw. “Who really knows how to work with media and stuff like that, and Cassandra was pretty much the top of the, well, as far as I’m concerned, the only name on the list.”

That past experience still helps Ysbryd Games to this day. As Business Developer, Khaw spoke laughingly of her experience as a video game journalist. “It offers a lot of background and a kind of perspective where if people don’t reply to my emails I don’t automatically panic and think, ‘Oh no! People hate me! I can’t send emails anymore!’ And I kind of just shrug it off and go, ‘Welp! That’s probably 200 emails that guy received, and that’s a lot to track.’”

Kwek, on the other hand, used his background in development to build stronger relationships with the teams he now represents.

“I think as a developer you know all of the stories about bad publishers and how they basically try to put their fingers in [projects] in bad ways and disrupt what the creative vision is and what they [developers] actually want to do,” says Kwek, “so I think my experience just basically helped inform me how to actually be helpful to the teams in terms of finding out what they need, what they’re not good at, and what can me and Cass and our Community Manager, Kris, [do to] help them out, supplement their work, and make it stronger.”

This experience allows Ysbryd to take a more personalized approach to publishing too. The company tries to hone in on where developers are struggling. If they need help with communications and marketing, for example, Ysbryd provides backup.

“A big example is with our game, one of our games, VA-11 HALL-A,” Kwek explains. “Because the developers are based in Venezuela, they have serious problems getting a visa to travel to the States for events, so we’re their marketing, hitting the pavement on their behalf. And they trust us to do it, and we had long chats with them about their baby, basically, and how we should put it in front of people.”

This personal approach crafted to each developer’s needs has sort of formed the foundation for Ysbryd Games’s identity as a publisher. “It depends on the needs of the developers,” Khaw notes. “Some of them we get really into working with them, assisting with QA, editing any kind of questions they might have. And we have developers who, because they are experienced do not require as much direction but more support in regards to, say, going to conventions, providing monetary support, and so on.”

But development studios have to be a good fit in terms of personality as well. Ysbryd watches out for projects that they can really put a part of themselves into, as well as teams that are open to communication. Publishing means having a lot of conversations with development teams to make sure that Ysbryd is clear on the creative team’s goals and desires for their project. Additionally, Ysbryd wants to be able to help and bounce around ideas to really make a fledgling game something special.

“We welcome it,” says Kwek. “I think we’re at our best when we work with developers who we can really connect with, whose work we can really work with.”

Of course, they haven’t come to this conclusion easily. There have been challenges in the past involving studios (none of which Ysbryd is currently working with) that would disappear overnight.

”I’ve definitely run into people who don’t understand what trust is, or how to, or they don’t understand what abusing trust means,” says Kwek. “I think a lot of developers have experienced this on the other side of the table. They’re like, ‘Oh, I got screwed over by so-and-so publisher, and you know, they took advantage of me at our most desperate time,’ and I need to say that the same thing can happen on the other side of the table as a publisher. You know, a dev basically disappears overnight or something similar to that effect, and you’re like, ‘What? How?’”

Building a trusting relationship with your publisher is essential for both parties and for the success of the game. “We’re not just a tool that you use,” Kwek says. “I think it definitely needs to be much more of an organic relationship for the partnership, and therefore the final game, to be more successful.”

Khaw agrees, relating publishing to her experience as a fiction writer and working with an agent in that industry. “It’s very easy to fall into the trap of thinking that all a publisher and a developer does is exchange money and services and so on,” she says, “but a publisher can be doing other things for you, and you should always pay attention to that while at the same time not taking advantage of it.”

A cold, less-involved approach to publishing certainly goes against Ysbryd’s philsophy. “I think we’d rather close down the company if we felt that the only way to do things was, for example, some kind of high-volume model where we […] publish as many games as possible, but they’re all kind of crappy and we’re not able to build relationships with each of the developers, you know?”

For productive, quality game development to thrive, both sides need to be invested in each other. If you’re having trouble reaching out to your publisher, the key to a publisher’s heart, it turns out, is quite simple: “If you want publishers on the floor to love you,” Khaw jokes, “bring them coffee or chocolate-covered espresso beans. Instant love.”