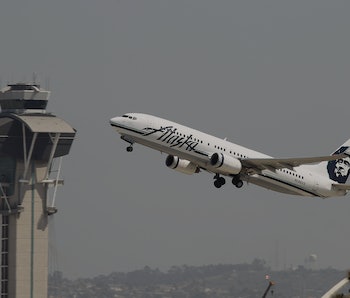 A plane departed from Seattle and landed in Arlington on Monday. That wouldn’t be notable — many planes fly across the country each day — if it weren’t for the fact that it was the first to use a biofuel made by the Northwest Advanced Renewables Alliance (NARA) and its partner Gevo.

Alaska Airlines said the flight relied on a 20 percent blend of the new biofuel. Even with this relatively small amount, the company estimated that Monday’s flight emitted 70 percent less CO2 than a flight powered exclusively by traditional petroleum jet fuels would have.

NARA supplied forest residuals (unwanted pieces of wood left behind by logging practices) from which cellulosic sugars were harvested. Gevo then used a patented process to turn those sugars into cellulosic renewable isobutanol, which was then sent to a biorefinery facility to be turned into the Alcohol-to-Jet (ATJ) biofuel that was used to power the Alaska Airlines flight.

One flight might not make a big difference, but NARA estimated that this renewable biofuel could have a positive environmental impact if Alaska Airlines uses it for more of its flights:

While the 1,080 gallons of biofuel used on the flight has a minimal impact to Alaska Airlines’ overall greenhouse gas emissions, if the airline were able to replace 20 percent of its entire fuel supply at Sea-Tac Airport, it would reduce greenhouse gas emissions by about 142,000 metric tons of CO2. This is equivalent to taking approximately 30,000 passenger vehicles off the road for one year.

That could be doable: Gevo said that it believes ATJ “has the potential to offer the most optimized operating cost, capital cost, low carbon potential, feedstock availability, scalability, and translation across geographies” of any current option for renewable jet fuel.

All of which could make a big change to renewable energy. Convincing people to use solar panels or drive electric vehicles is one thing; switching to renewable jet fuel is another.

And while a solar-powered plane flew across the Atlantic in June, it only fit one person. Alaska Airlines flew a plane full of people. At least for now, this biofuel seems to be the best option for making flights just a little bit greener.