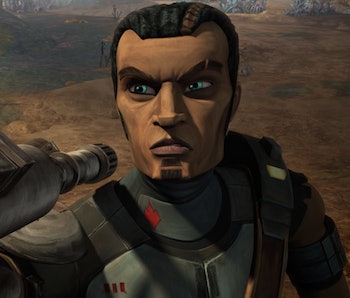 Jyn Erso is no stranger to Saw Gerrera in the Star Wars universe, but how do they know each other? All will be explained when the Rogue One prequel novel, Catalyst, releases on November 15.

Catalyst promises to explore Jyn’s childhood, the stories of her parents, and how she met Saw Gerrera, who will be a vital part of Rogue One.

We first met Saw when he was introduced in The Clone Wars. A skilled fighter, Saw is a key player in the rebellion as we see it in Rogue One. But his actions during the Onderon arc of The Clone Wars and his commitment to leading the Onderonian rebellion eventually paved the way for the Rebel Alliance.

The events of Catalyst may, at least in part, take place after Saw Gerrera’s actions during the Battle of Onderon and the death of his sister, Steela Gerrera, but will likely give us some of his origin story as a Rebel fighter.

We know that the Saw Gerrera of Rogue One is battle-hardened, but Catalyst will likely give us a glimpse of the man Saw was before years of fighting took their toll (and his leg). The way in which he factors into Jyn Erso’s early history will give us a hint as to what she means to Gerrera and how they’ll work together to stop thwart the Empire in Rogue One.

Catalyst will be released November 15.