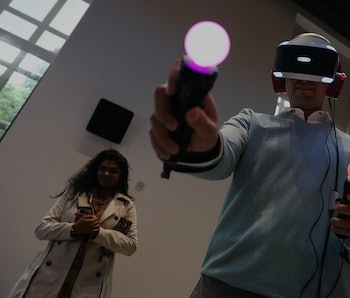 The last thing you want when you have a virtual reality headset strapped to your face is to trip over a cord. But the seamless video that makes VR so great requires a lot of data — more than standard wifi connections can handle. Today’s headsets are all tethered to a high-powered computer or gaming system with a big HDMI cable — but maybe not for long, thanks to MIT’s new system that can help transmit huge amounts of data wirelessly.

Today’s VR systems use at least several gigabits per second. All that data gets you real time video that responds to your movements. But you have to have an HDMI cable to make that video happen seamlessly. Because the video is real time, compressing and decompressing the data to send it over wifi isnt an option. For wireless VR, millimeter wave technology, the same technology behind 5G wireless, is the best bet.

Millimeter waves can transmit up to 10 gigabits per second, but they also need a direct line of sight between the transmitter and the receiver. Even putting your hand out or turning your head would disrupt your VR headsets video. Setting up multiple transmitters around a room would get expensive pretty quickly.

A team of researchers at MIT’s Computer Science and Artificial Intelligence Laboratory has developed a way to get millimeter waves to your headset without interruption or bankruptcy. It’s a small, programmable mirror called MoVR that can take an incoming millimeter wave transmission and reflect it to a VR headset. The two antennas that receive and transmit the signal are both smaller than a credit card and can match the direction of the receiving headset. The MoVR is basically a mirror that can reflect a signal at a different angle than it was received.

The small reflectors can be attached to walls around a room, so multiple people could use VR headsets in a room without interrupting each other’s signals. With rechargeable batteries for truly wireless headsets, VR games could get a lot more physical and interactive. And VR games aren’t the only application for MoVR — wireless networks like 5G could benefit from this new type of reflector.