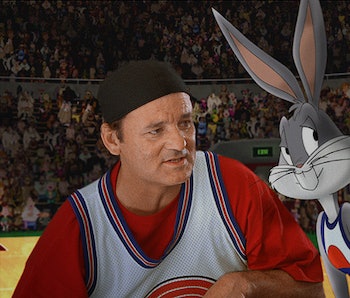 Michael Jordan and Bugs Bunny are the obvious focal points for nostalgists celebrating the 1996 film Space Jam. But while the movie was certainly a triumph in cross-branding, its most lasting contribution may actually be the birth of the modern, folk hero version of Bill Murray.

In just one scene in Space Jam, Murray’s public persona changed forever. When the actor, who is playing for the Tune Squad basketball team, tells his teammates, “WHOA-HO: I don’t play defense,” Murray transitioned from the goofy ‘80s comedic Bill Murray, to the irreverent, deadpan, and non-sequitur Bill Murray we know today.

The soulful, wounded (but still funny) Murray was popularized in a series of indie films of the late ‘90s and early 2000s, including Rushmore, Lost in Translation, and Broken Flowers. Before that, most people thought of him as a goofy, screwball, sketch comedy character actor. His characters were fun, but they lacked dimension, or at the very least, the implication of depth wasn’t there. Despite rare dramatic turns in movies like The Razor’s Edge, prior to the 2000s, he was still known as the guy from Scrooged, Ghostbusters, and reruns of SNL.

Space Jam, and the “I don’t play defense” line specifically, represents the moment where Bill Murray started to hint at backstory to his characters, and transition into modern Bill Murray. Bill Murray’s confident entrance as “Bill” in Space Jam was the first time he teased an unexplained off-screen complexity that would later become part of his brand. In Space Jam, this notion is still metafiction; Bill Murray (like Michael Jordan) is just playing “Bill Murray.” But after Space Jam, this layering pretty much describes all subsequent Bill Murray roles: he’s played a surreal version of himself at every point since he appeared in Space Jam.

In the “I don’t play defense” scene, Bill starts giving orders out to the Tune Squad, orders which can’t be carried out because his character doesn’t understand the situation and is ill-informed. In more contemporary Bill Murray movies, this pattern is his entire modus operandi: his characters intentionally don’t know what’s going on.

Think of The Life Aquatic where Zissou starts firing off insane orders as to what to do next, only to be reminded that his boat must first have its engine fixed before his laundry lists of demands can be met. As in Space Jam, Murray as Zissou doesn’t miss a beat when corrected, and simply goes with the flow, as though this obvious oversight had been part of his plan all along. And while some of his pre-Space Jam characters exhibited a similar acute detachment from reality (i.e. Venkman in Ghostbusters), “Bill” in Space Jam is way more overtly delusional, which totally foreshadows the-I-don’t-give-a-fuckness of his roles that would follow.

“I don’t play defense” asserts a specific air of deflated nihilism, which is the quality that totally informs Murray’s characters in Lost in Translation, and, really, all of his Wes Anderson roles. Take Murray’s heartbroken reaction in the The Royal Tenenbaums: Upon finding out his lover has been cheating on him with multiple partners for years, Raleigh St. Clair (Murray) simply remarks, “So, she smokes.” It’s the moment of understatement, which is somehow combined with overstatement, which are the kind of arch one-liners that have defined Bill Murray’s popularity post Space Jam.

These lines are weirdly tip-of-the-iceberg character details; they suggest more than they explain overtly. Murray’s characters in these scenes assume the audience is “in on the joke,” even if the joke isn’t really explained. The audience, perhaps unintentionally, then imagines what they don’t know based on Murray’s similar performances. “I don’t play defense” is, arguably, the first layer of Murray’s modern brand.

It’s hard to prove that Sofia Coppola saw Space Jam before casting Bill Murray in 2002’s Lost in Translation, but she probably saw Murray in Wes Anderson’s second film, 1998’s Rushmore. Similarly, it seems doubtful that Jim Jarmusch would have cast Murray in 2005’s Broken Flowers prior to Rushmore or Lost in Translation. And maybe none of those movies would have happened if Bill Murray didn’t start playing a weird simulacrum of himself in Space Jam. In Space Jam, we saw the birth of Bill Murray’s petulant self-assured persona, a persona that suggested a backstory of mostly his own making, rather than the flat characters he’d played before.

In the final scenes of the film, Murray is seated court side next to Larry Bird at a Chicago Bulls game. He’s despondent over not playing in the NBA, and says “Larry, that could have been me!” And whether Murray knew it then or not, he was in fact, headed to the big leagues. His new, award-winning acting persona was being forged. All thanks to the Space Jam.

More like this
Culture
Jan. 26, 2023
Michael J. Fox’s strangest movie remains a stupid, ridiculous joy
By Mónica Marie Zorrilla
Entertainment
Jan. 27, 2023
Onyx the Fortuitous and the Talisman of Souls is a cringe comedy as overlong as its title
By Andy Crump
Entertainment
Jan. 31, 2023
Cassandro Unmasks the “Liberace of Lucha Libre” in a Breezy, Triumphant Drama
By Lyvie Scott
LEARN SOMETHING NEW EVERY DAY.
Related Tags
Share: