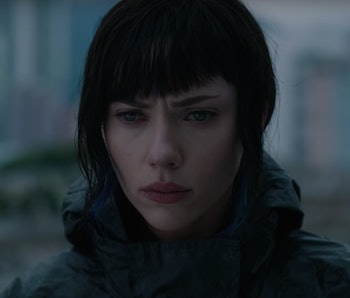 How many people are killed in the first Ghost in the Shell trailer? It depends on how you define people.

On Sunday, Paramount Pictures released the trailer for the live-action film based on the legendary anime — by way of manga — series. The fictional city of Niihama is a stunning, hologram and augmented reality-filled landscape that Scarlett Johansson’s Major Motoko Kusanagi shoots, punches, and leaps her way through, fighting various criminals and becoming more conscious of her new cyborg self all the while.

It also offers vivid, unsettling, and ultimately memorable visuals. Hopefully the film’s full of stuff like this:

You’re sure to find yourself in the uncanny valley as you watch Johannson travel through this gloomy, perpetually raining, post-cyberpunk world. While she’s dramatically, acrobatically firing handguns and upper-cutting dudes into puddles of brown water, she’s thinking about her past and her weird, new present. As Juliette Binoche’s Dr. Ouelet tells her, “You are the first of your kind, but you are not invulnerable.” Johannson replies, “Maybe next time you can design me better.”

A slowed down piano version of Depeche Mode’s “Enjoy the Silence” plays as Major wonders later, “I know I have a past. I’ll find out who I was.” And then, Christoph Waltz’s character tells her, “Everything they told you was a lie. They did not save your life, they stole it.”

As soon as news broke last year that Johansson would play the iconic future cop, fans of the series were angry or confused as to exactly why a white American was chose to play a Japanese character. “The whitewash cycle is complete,” commented one fan on Twitter. “I REALLY like Scarlett Johansson. She’ll do great in Ghost in the Shell. But it bothers me Hollywood STILL overlooks a lot of Asian actors,” commented another.

Inverse will have much more on Ghost in the Shell this week. As you can see, there’s a lot to unpack: