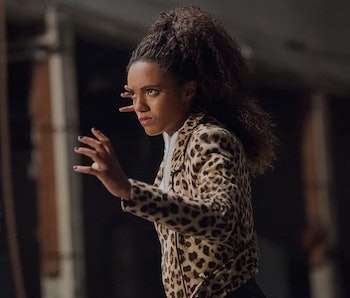 This week on Legends of Tomorrow, the Legends traveled to (San Junipero)[https://www.inverse.com/article/22715-black-mirror-san-junipero-heaven-1980s] — excuse me, the 1980s — to combat Damien Darhk’s latest plot working with the Soviets. More important than their face-off with Darhk, though, were some of the Legends’ personal battles. The ‘80s weren’t all that long ago, after all.

Martin has the most literally run-in with his past, since he actually hangs out with his younger self. Past Martin gets stabbed while trying to chat with Darhk, and after saving both of them, Martin then has to tell himself to straighten up his act and pay more attention to what really matters — his wife, Clarissa.

Amaya, meanwhile, is dealing with the ramifications of her decision to stow away with the Legends and abandon the JSA back in the ‘40s. When she and Nate go explore a secret JSA training site, they’re met with only cobwebs and Obsidian, now an old man and the team’s sole survivor. He reveals that the rest of the team died in a mission in Leipzig in 1956, but he wasn’t allowed to go because the government knew he was gay. Amaya reveals that she and Rex were together, making her quest for justice that much more personal. Obsidian is able to forgive Amaya for abandoning the JSA, though, and even takes a bullet for her.

Sara, meanwhile, is still dealing with her sister’s death at the hands of Darhk. Every time she sees him, she veers off from the mission at hand in order to try to get vengeance, and it almost screwed everything up at the White House.

However, Sara’s able to find some sort of peace. Instead of killing him, she settles past demons by taunting Darhk with the horrible truth of his future. It may have made her feel better (and allowed her to pickpocket the relic back from Darhk), but it’s going to have big ramifications for the future. Darhk knows she’s a time traveler now, and because of this, he’s ready to team up with Eobard Thawne and add a fourth dimension to his plan.