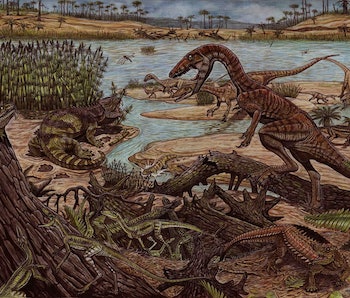 A collection of fossils embedded in a 230 million-year-old rock in southern Brazil is helping paleontologists unlock the mystery of where the dinosaurs came from. New research based on the find, published Thursday in Current Biology, describes two new species: a lagerpetid precursor to the dinosaurs dubbed Ixalerpeton polesinensis and a carnivorous ancestral cousin of the sauropodomorpha, Buriolestes schultz, which is one of the earliest dinosaurs yet discovered.

What makes these fossils so special is both their relative completeness and the fact that they were found in the same spot. This confirms what had been suggested before, but only from fragmentary evidence: The dinosaurs did not suddenly outcompete their close non-dinosaur precursors, but coexisted with them in the same ecological niches for tens of millions of years.

“Lagerpetids appeared in the middle Triassic, dinosaurs came slightly later,” senior author Max Langer of Universidade de São Paulo tells Inverse in an email. “Their joint occurrence shows that dinosaurs did not replace such animals in a rapid taking over of ecological space, but that their rise (gain in diversity) was more steady, since various groups (lagerpetids included) were co-occurring with dinosaurs in the beginning.”

Ixalerpeton, the lagerpetid, was maybe a couple of feet long. This specimen is the most complete lagerpertid ever found, and includes the first recorded examples of a skull, neck, arm, and pectoral girdle from this animal group. This gives paleontologists a better idea of which traits were are uniquely dinosaurian, and which were shared with early dinosaur precursors, says Langer.

Buriolestes is much bigger than Ixalerpeton, maybe ten feet from snout to tail, but still a dwarf compared to sauropod giants like Diplodocus and Brontosaurus, which would emerge many millions of years later. His teeth were strictly adapted for meat eating, making this the only known example of a carnivorous sauropodomorph. “As such, it helps to understand how those dinosaurs turned into eating plants right in the beginning of their evolution,” says Langer.

“Each alone, the finds would already be of great scientific importance,” he says. But found together, and preserved so completely, these specimens tell a fascinating story of a time when the reign of the dinosaurs was just in its infancy.

It’s tempting to think of dinosaurs as a fairly homogenous entity, but, in fact, they existed for 165 million years and evolved considerably in that time. The Tyrannosaurus rex is a closer relative to the chicken, both in terms of time and genetics, than it is to these early dinosaur and proto-dinosaur beasts.

More like this
Science
Jan. 21, 2023
Plague study complicates a commonly held belief about the Black Death
By Samuel Cohn, Philip Slavin and The Conversation
Science
Jan. 17, 2023
Why can’t I understand my dog? Recent research may offer an answer
By Tara Yarlagadda
Science
Jan. 19, 2023
Dinosaur fossils complicate our understanding of how they reproduced
By Elana Spivack
LEARN SOMETHING NEW EVERY DAY.
Related Tags
Share: