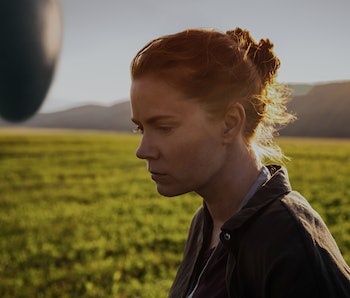 Here’s a scary thought: If the United States and Russia can’t agree on Ukrainian borders or even the pettiest aspects of cyber security, could the internationally community respond responsibly to an apocalyptic threat?

Though Ted Chiang’s short story “Story of Your Life” is mostly hyper-focused on the exchanges between human scientists and a group of aliens that suddenly descend upon the earth, its big screen adaptation, Arrival, paints a picture — or a mural — of diplomatic madness. In the film, massive alien ships with mysterious occupants land in a dozen countries, including the U.S., Russia, and China, creating an immediate need for human unity and, of course, a lot of narrative-driving tension.

“The loss of U.S. hegemony helped the dramatic narrative,” screenwriter Eric Heisserer told Inverse. “We weren’t the ones calling all the shots. The U.S. doesn’t get to be the leader, the number one domino.”

As expert linguist Dr. Louise Banks (Amy Adams), physicist Ian Donnelly (Jeremy Renner) and their team of military assistants try to establish a line of communication with the aliens, the State Department pressures its ambassadors for humanity to talk faster. Fear makes the issue of extraterrestrial motivation paramount. Military types want to know “why” the aliens have descended upon earth. Are they hostile? Do they want to trade? What are they saying to the Japanese (and can they trust the daily reports from other nations about their conversations with the aliens)?

“There were more scenes in the script; I sketched out conversations between other alien arrival sites, between the London team and one of the Russian teams,” Heisserer said. “I had the Indian Ocean site, which is in international waters, and I asked who is taking charge of that place (spoiler: nobody and everybody). It was a fascinating work of political gymnastics that at at the end of the day just made my head hurt.”

Director Denis Villeneuve’s film didn’t keep all of the scripted international conflicts, but the filmmaker did include looks at how other countries approached communication with the aliens.

“We landed on mahjong as a model of communication that would be an alternative to them learning Mandarin,” production designer Patrice Vermette said of the Chinese government’s attempt to bridge the infinite language gap. “Then we began to realize all the pitfalls and trips that came from using a game with rules and victory and defeat baked into every interaction, and realized how that could undermine all the communication you are trying to do.”

In the film, the Chinese have a more difficult time with the aliens because of this alternate mode of communication, which in turn puts pressure on the American team to decode the aliens’ intentions. The film endorses patience and attempts at empathy over confrontation, policies that become harder to maintain as time goes on — China and Russia in particular inch closer and closer to confrontation with the aliens, which could precipitate an apocalypse for humanity.

Heisserer tried to consider not only what would happen if aliens arrived, but what would happen over time if they stayed. “Every indicator externally suggested that, yes, the longer you had these crazy scary alien ships parked in your backyard and you, as a regular citizen, had no info, the easier it was to buy that you’d be freaked out,” he said. The character of Colonel Weber [Forest Whitaker], is stuck managing an impossible situation: hysterical government leaders and citizens looking for answers, and patient scientists and linguists who see this as the opportunity of a lifetime.

In the version of Arrival that made it to screen, citizens begin to riot and demand information, and, though the United States president goes unnamed in the film, it is clear that he or she has the fortitude to withstand that outcry. Given what we’ve seen in this tumultuous presidential election, with two candidates who promise very different approaches to major crises, it is only fitting that Arrival hits theaters this week.

“For a long time there was a scene in the script where Col. Weber had to deal with the growing crowd surrounding the site of normal citizens who have come to look,” he said. “The tone of that group is more and more violent, the way it is with a certain political candidate in this election. The scene is Col. Weber talking to a sergeant, and the sergeant says, ‘I need 200 more men with assault rifles patrolling the area,’ and Weber says how dangerous it was having 200 armed soldiers next to an alien spaceship. The sergeant says, ‘I’m less worried about what happens to our citizens than what happens to our visitors.’”

More like this
Entertainment
13 hours ago
25 years ago, Nic Cage made his most explosive sci-fi movie ever — it was almost even better
By Jake Kleinman
Culture
6.28.2022 11:00 AM
5 years ago, the director of Parasite made his most unsettling sci-fi movie
By Allyson Johnson
Culture
6.28.2022 9:00 AM
8 sensational sci-fi shows and movies coming to HBO Max in July 2022
By Robin Bea
Related Tags
Share: