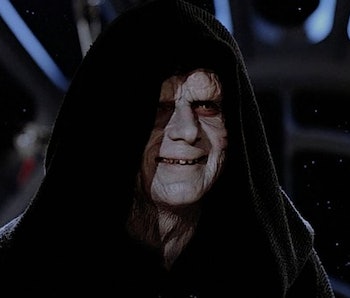 The best Star Wars movies always depict the galaxy in a state of revolution, and that’s because the political status quo of Star Wars is dysfunctional to the point where no rational person can stand to participate anymore. And even though Star Wars happened “a long time ago,” in terms of politics, it looks like our future.

On Tuesday, across the galaxy of the United States of America, nearly everyone is casting their votes for the President: some with hope, some with cynicism, and some are just going through the motions. Our Hillary or Trump choice isn’t exactly analogous to Supreme Chancellor Palpatine versus Chancellor Valorum, but in terms of where we’re headed, the broken and corrupt electoral system in the Star Wars galaxy is almost certainly in our future.

The Star Wars prequel trilogy may be derided for all kinds of narrative crimes (like Jar Jar Binks) but the way in which the three films depict the conversion of the Republic into the Empire is deft and alarming. Everybody views Jar Jar Binks as an example of poor taste on the part of George Lucas’s creative brain, but if we consider Lucas to be a political satirist then it’s best to remember he turned the outrageously stupid Jar Jar into a fucking senator in Attack of the Clones. Lucas’s opinion of politics, and the way in which people get into office is pretty clear here: It’s a joke.

In Revenge of the Sith, senator Padmé Amidala bemoans, “This is how liberty dies, with thunderous applause.” While Senator Amidala is certainly cast as a “liberal” and “one of the good guys,” she’s definitely lived her entire life as a part of a totally corrupt system, which she has done little to change. If we code Padmé Amidala as “Hillary Clinton,” then Bill Clinton becomes Anakin Skywalker: a “good guy” who we constantly make excuses for, in terms of all the terrible corrupt things he’s done. In this way, Padmé/Hillary is no better: a supposedly well-meaning person who is totally out of touch with her constituents. She’s a “limousine liberal.”

If Palpatine is a “conservative” demagogue like Trump, then he shares one thing in common with Senator Amidala: wealth. Here, the galaxy of Star Wars is an exaggerated version of our own political system: The people making the decisions have no idea what is going on with the people who they represent, and in most ways, don’t really care. Control of the Jedi Council is a little like control of the Supreme Court, which of course, is something Palpatine eventually abolishes with he gets into power.

None of this really means anything to the regular citizens of Star Wars, who presumably, don’t vote, but rather have their own combo version of the Electoral College and Congress in the form of the Galactic Senate. Here, the Star Wars galaxy shares two key similarities with American politics: an insane lack of transparency combined with a vast and disparate population which can’t possibly have all their ideologies represented by distant politicians.

In all the prequel films, the governing of everything takes place on Coruscant, a giant city-planet which seems to be totally disconnected to what is happening on other planets. Here, one percenters (well meaning, or not) govern the entire galaxy from afar. And by the time of Attack of the Clones, there is literally no information sharing as to what the hell is going on.

This corruption is trotted out in The Phantom Menace when a lame-duck president Chancellor Valorum is ousted from office swiftly with an overwhelmingly huge vote of “no confidence.” Senator Amidala — and presumably, the rest of the senate — is given pretty shoddy information to cause this impeachment, most of which comes from the special interests of the Trade Federation. We can let Senator Amidala off the hook a little bit here because she’s Princess Leia’s mom, but come on, she was part of this problem, too.

Again, because literally no one in the “public” has any idea what is really going on (I’ve written elsewhere about the lack of outer-space news coverage of the invasion of the planet Naboo) the public is fairly disenfranchised on this stuff. Even if they could have voted for Palpatine versus Valorum, it’s hardly a real choice. Why didn’t Amidala run for Supreme Chancellor? We could blame the Dark side of the Force here, but there’s an easy answer: Palpatine was from her home state — the planet Naboo — she owed him. Sound familiar?

The second part is pretty obvious: There are way too many planets in the Star Wars universe to believe that Tusken Raiders on Tatooine really have much in common with people on Ewoks on Endor. In fact, let’s be honest, those two examples are easy picks, because there’s no way any of those stuffy snobs in the Senate would even allow a delegation of Tusken Raiders or Ewoks into the electoral process. The Wookies have some political sway, but that seems like lip service.

By the time of A New Hope, the Emperor (formerly Chancellor Palpatine) is able to get rid of the entire Senate off-screen. Donald Trump wouldn’t be able to accomplish that in one term, but in 30 years? Amidala and Bill Clinton weren’t able to do anything from inside the system, mostly because they were part of the problem, and also, most other politicians were exactly like Jar Jar.

In The Force Awakens, Leia has broken all ties to politics, partly because it seems like (in the novel Bloodline) a bunch of people found out her dad was a warlord named Darth Vader. You can think of these people as the “birthers” of the Star Wars universe, if you want. But either way, it’s pretty telling that the biggest political idealist — Leia — is back to being a revolutionary even after forcing out a tyrannical dictatorship through a full on coup d’état.

In the same film, Max von Sydow’s Lor San Tekka says there can’t be “any balance” without the Jedi. In our own political system, the idea of “balance” is a similar fairy tale, one which probably is closer to to the idea of “voting your conscience.” Because when the Dark side of the Force clouds everything, how is that even possible?