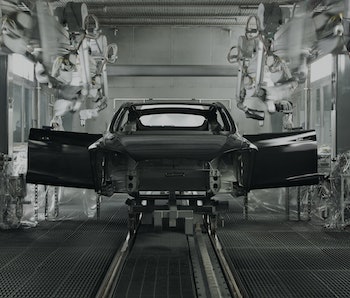 Tesla wants to make 500,000 cars a year by 2018. Realizing that goal will require the company to improve its factories, it announced on Tuesday that it’s planning to buy Germany’s Grohmann Engineering to make the tools that will automate much of the manufacturing process. Your first — or next — Tesla might be made almost entirely by robots.

News of this acquisition comes shortly after Tesla CEO Elon Musk predicted that automation will lead to universal basic income as robots take over more jobs. Now it seems Musk will help that process along by automating Tesla’s factories.

If the deal is approved by regulators in both countries, Tesla will form a division called Tesla Advanced Automation Germany, and the renamed Tesla Grohmann Automation will be at its center. The company said it expects to create 1,000 skilled jobs in Germany over the next two years, but did not say how it might affect those working the assembly lines.

“As the machine that builds the machine, our factories are so important that we believe they will ultimately deserve an order of magnitude more attention in engineering than what they produce,” Tesla said in Tuesday’s announcement. “At very high production volumes, the factory becomes more of a product than the product itself.”

That’s why the company has embarked on projects like the Gigafactory, where its batteries will be made, and a factory in Buffalo where it will create solar panels in partnership with Panasonic.

Tesla said that using some of the tech developed by its automation division will “yield exponential improvements in the speed and quality of production, while substantially reducing the capital expenditures required per vehicle.” It’s also meant to raise production at the Fremont Factory beyond its current 400 percent growth over the last four years.

The company expects the deal to pass in early 2017. If that’s the case, and if Grohmann is put to quick use, there’s a chance that the next Tesla you see on the road will have been made by robots. It might even drive itself — which means that the whole thing is just robots the whole way down.

More like this
Innovation
Sep. 17, 2022
Why everyday household chores may be practically impossible for today’s robots
By Ayonga Hereid and The Conversation
Innovation
Sep. 22, 2022
Trash can-sized robots could revolutionize how you travel — but there's a catch
By Molly Glick
Innovation
Sep. 21, 2022
Look: Drones could be the future of 3D-printed architecture
By Jennifer Walter
Related Tags
Share: