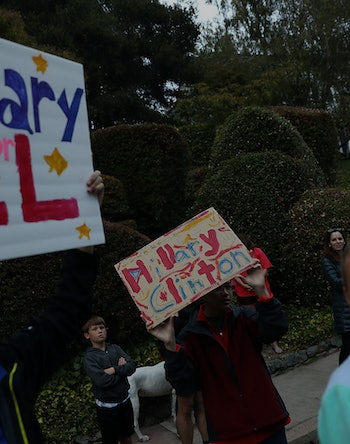 Former Secretary of State Hillary Clinton and former reality television host Donald Trump have, over the course of a bruising election, been publicly reduced to “Hillary” and “Trump.” This abridgement is practical reasons: Hillary Clinton is married to a prominent ex-politico, and Donald Trump has spent the better part of his lifetime building his surname into a brand. But monikers don’t stick just because they make sense. What we call our leaders is a reflection of how we think about them and the fact that Secretary Clinton has been transmogrified by public sentiment into “Hillary” points to a peculiar dynamic that is unlikely to change going forward. Her supporters want her to be relatable and her opponents want her to be trivial.

“In general, calling people by their first name in professional settings is either a sign of disrespect or a sign of personal closeness,” explains Dr. Virginia Valian, Distinguished Professor at the CUNY Graduate Center and Co-Director of the Hunter College Gender Equity Project.

In a professional setting, there is no Hillary. Secretary Clinton’s aides, along with a lot of beltway-types, refer to her as HRC, in the tradition of an FDR or a JFK. But there’s a kind of coldness to that nickname. Perhaps it suits a woman who often struggles to convey populist messages, but it doesn’t suit her aims. HRC is the insider but Hillary is the politician. The name feels like a form of code-switching, deftly and humbly handled. But some aren’t totally convinced. A CNN editorial pushed for people to “Stop calling her Hillary”, arguing that Clinton had earned the respect of a more formal address.

But that’s going to be hard because of, well, Bill. Clinton needs to distinguish herself from President Clinton. She has done so on a policy level and in the political arena, but the name she took back in Arkansas survives in joint custody. There’s some precedent for this, but also not. Jeb Bush went by simply his first name (and usually followed by an exclamation point), but his father went by Bush. And no one seemed overly anxious that the electorate would get him confused with “W.”

There’s no question that her detractors, consciously or otherwise, delight in using the presumption of her first name to belittle Clinton, but her own camp has embraced “Hillary” in toto. “Hillary for America” and “Ready for Hillary” and other pro-Hillary entities operate on a first name basis.

There hasn’t been a period in time when Hillary Clinton’s name wasn’t political. Known professionally as Hillary Rodham before and after her marriage to Bill, in 1982 she became became Hillary Rodham Clinton to make her husband — struggling to get re-elected as governor of Arkansas and sorely in need of a traditional family-man image — more attractive to voters.

In the 1990s, with media accusations of infidelity against her husband reaching a pitch, the addition was a nod to marital unity. She would go by several different combinations, depending on the occasion, for the duration of his presidency and for a decade after. Now, she campaigns as HiIlary Clinton. But mostly she campaigns as Hillary.

Trump, who has used the fluctuation as an opening to call her Hillary Rotten Clinton, reportedly has even his step-children and closest aides address him as “Mr. Trump.” Watching her needle him in debates with a cool series of Donalds was a reminder that his ownership of his last name exemplifies the sort of power grab that would present to society as too ambitious if a woman attempted the same thing.

“Many women who intend to vote for her call Clinton by her first name, and I think that is a way of signaling that they feel aligned with and close to her,” wrote Valian. “But that very closeness signals a breach of professional boundaries. The people who call Clinton ‘Hillary’ who do not intend to vote for her are using the term to indicate that they do not take her seriously.”

For a historical television example of a powerful franchise roundly shutting down possible upset male fans when the unprecedented threat of a female lead arose, there’s the pilot episode of Star Trek: Voyager. On his first day on the job, a young ensign addresses his female commanding office as “sir,” whereupon she informs him that, despite what protocol, may dictate, she doesn’t like being called that. He apologizes, calling her “ma’am.”

“Ma’am is acceptable in a crunch,” Kathryn Janeway says, stepping forward. “But I prefer captain.”

In the end, of course, all the surnames and nicknames and mononyms will come out of the chrysalis as Madame President. From a purely technical standpoint, it could be argued that it should be Mrs. President, but that’s possibly too uncomfortably feminine to really fly. (Though perhaps Bill’s reincarnation as First Gentleman will settle any residual confusion about which President Clinton we are now referring to.)

“Theres no question that many men are intimidated by strong women,” said Dr. Juliette Blevins, Director of the Endangered Language Initiative and a professor at the CUNY Graduate Center Linguistics Program. “And that something like a first name will tend to soften the authority image, make the person seem more collaborative. If you’re a male who’s intimidated, it makes it easier to accept.”