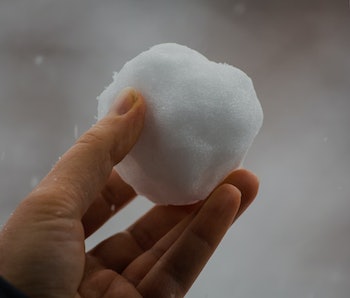 We’ve all been there. You run outside on a cold morning and scoop handfuls of fresh, soft, powdery snow. You press and press between your mittens, but it just won’t form into a solid ball. The harder you try to pack it, the more snow you try to add, the more powder escapes between the cracks between your hands. You finally declare enough and throw your handful of snow, only to see it immediate disperse in a cloud of sparkly dust. You came for a snowball fight, but what you got was a glitter fight.

There’s a very simple explanation for why some snow makes perfect, effortless balls that pack nicely and keep their shape until they explode all over their intended target, while other snow just won’t cooperate. It comes down to physics.

Water is a strange and wonderful substance with a rare property: It takes up more room in its solid state than in its liquid state. This is weird, because water molecules in the liquid state have more vibrational energy, and you would expect them to therefore take up more space. But in the liquid state you get hydrogen bonding: the molecules are attracted to each other and this is the reason water will climb up a towel against gravity if the bottom end is left in a puddle. This force of attraction means liquid water can pack more densely than solid water, which forms a rigid crystal structure we call ice.

The important thing to remember for your snowball fight is that frozen water, under pressure, will melt. As you squeeze the snow together, just the edges of the flakes will slightly melt. As soon as the pressure is released, the water will refreeze and act as a binding agent that holds the ball together. J. Murray Gibson, founding dean of Northeastern’s College of Science, explains that what you are doing is welding the snow to itself — using material in liquid form to bind the solid. It is pressure, and not heat from your hands, that produces the liquid water glue, so no, taking your gloves off won’t help.

The problem arises when temperatures get very, very cold. The colder the snow, the more force you need to apply to get it to weld together. This is why the light, airy powder that skiers dream of is useless for snowballs. It’s just too cold.

The best snowball snow falls when temperatures are just below freezing. If the flakes are clumping together as they tumble to Earth, you know you’re really in the money. This snow will pack under firm pressure, but won’t turn into an ice-ball deathtrap like you will get with warm, wet snow. Unless you’re a total asshole, you want your snowballs to be fairly soft on impact.

If the weather is too cold to make snowballs, you’re going to need to either increase the temperature or the pressure. You might try sourcing your snow from roofs or near buildings, where heat might be leaking out into the environment.

Yukigassen, a competitive snowball fight with rules similar to capture the flag, uses a mold to form perfect, spherical snowballs. The more people you can get to put their weight on the balls, the firmer they will be. Yukigassen International also suggests adding water or using a portable heater to warm the snow until it is wet enough to form balls.

Really cold weather can make a proper snowball fight a challenge, but a true competitor will not be deterred. With science on your side, you can make your balls ahead of time and outsmart the enemy, who will be left holding fistfuls of dust.