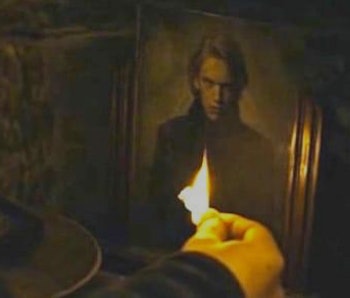 We know Grindelwald is a bad, bad wizard, but he’s always been something of a shadowy figure in the Potterverse. Until now. In Fantastic Beasts and Where to Find Them, we’re going to find out exactly why Grindelwald decided to stir up a violent magical shitstorm.

In a new clip from the film, we see a bit more of Percival Graves’s interrogation of Newt Scamander at the Magical Congress of the USA (or MACUSA). Graves questions Newt on Hogwarts, Dumbledore, and the “escape” of magical creatures from his suitcase. Was their escape, he wonders, accidental or intentional? Was Newt trying destroy the secrecy that’s protected wizardkind and non-magical people for centuries? Was he trying to start a war?

Newt knows where he’s going with this. “Mass slaughter for the greater good, you mean?” he asks, sarcastically evoking Grindelwald’s philosophy. As we saw in *Harry Potter and the Deathly Hallows, “for the greater good” are the words that Grindelwald often fell back on to take the moral high ground in the course of the terrible things he did.

“I’m not one of Grindelwald’s fanatics, Mr. Graves,” Newt answers.

This suggests that even though Fantastic Beasts and Where to Find Them is going to be our introduction into the wizarding world as it exists in the early-to-mid 20th century, Grindelwald is already making a terrifying name for himself, and he’s already doing terrible things under the guise of “the greater good.”

History as we learned it in Harry Potter makes it clear that Grindelwald used fear and hate to elevate himself to a position of power, and then used that power to make the wizarding community a darker, more divided, more distrustful place (sound familiar?). But so far we only have part of the story. It’s always been clear that Grindelwald is on the wrong side of history, but if we know one thing about the work and world of J.K. Rowling, it’s that nothing is ever that simple.

Get ready to see the origin story and the motives behind Grindelwalds darkness when Fantastic Beasts and Where to Find Them arrives in theaters November 18.

More like this
Entertainment
26 minutes ago
Ant-Man's Memoir Is Real and Hints at Dark Quantumania Ending
By Eric Francisco
Entertainment
Jan. 31, 2023
Dune 2 Will Be Hilarious, Says Actor Whose Character Killed His Own Dad
By Ryan Britt
Entertainment
Feb. 4, 2023
Superman: Legacy Will Reinvent the Man of Steel — Everything to Know
By Eric Francisco
LEARN SOMETHING NEW EVERY DAY.
Related Tags
Share: