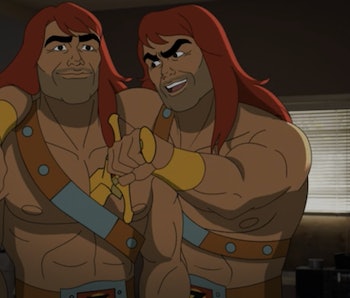 In the seventh episode of Son of Zorn, “A Tale Of Two Zorns,” the not-so-beloved characters finally had clear, meaningful emotional stakes. Though still an imperfect execution, Reed Agnew, the showrunner, provides a more grounded and earnest story than the show’s hollow and outright dumb take on cultural appropriation in the [last episode] (https://www.inverse.com/article/22621-son-of-zorn-fox-sitcom-black-ish-fresh-off-the-boat-tv-identity). Son of Zorn shows signs that it’s growing up — slowly. That being said, the show’s premise is still its own worst enemy.

Though Zorn is a pointed embodiment of toxic masculinity, the writers haven’t yet used that characterization to say anything profound or subversive about sexism or gender roles. Son of Zorn doesn’t exactly counter Zorn’s machismo with well-written, complex women, the kind of character foil Edie could be. “A Tale of Two Zorns” doesn’t go as far as changing that entirely, but it’s the first Edie subplot that truly works, one that comes from a believable, and three-dimensional place for the character.

All season, Edie has only existed in terms of her relationship to Zorn. We know little about her, and even the brief glimpses of her past with Zorn haven’t been about character development for anyone other than the titular character. But in “A Tale of Two Zorns,” the writers suggest a sense of self-awareness about Edie’s two dimensional role in the show’s world. Over lunch with her friends, Edie learns that she has been talking about Zorn too much. Her friends complain that all she does is gripe about her ex. The show finally addressed one of the biggest issues with this character: Who is she outside of her main conflict with Zorn? Though that question wasn’t quite answered in this episode, the fact that Edie interacted with characters who aren’t Craig, Zorn, or Alan for the very first time in the show’s run, is a sign that the writers are invested in finding out.

The other character the writers placed emotional stakes on this episode is surprisingly Zorn himself. Son of Zorn’s greatest feat is creating the most punchable sitcom character on television right now. But Zorn is so far past the point of redemption that it’s still tough to stomach. The fact that the most delightful and rewarding scene of the season so far is one where Edie and Zorn’s boss Linda beat up a Meka-Zorn, and identical robot clone and surrogate for the protagonist, says a lot. There’s a deep catharsis in watching Edie and Linda whap the shit out of Meka-Zorn with frying pans.

This episode, in particular, doubles-down on Zorn’s awfulness, Edie casually mentioning her ex committed genocide and Zorn making an offhand remark about slaughtering children. Instead of rehabilitating Zorn, the show seems determined to make him unbendable, immune to his new surroundings. And that’s really the only direction that could possibly make sense at this point. Zorn can’t be fixed.

It’s clear the character has insecurities, but it’s also clear that to the writers it doesn’t quite matter. At episode’s end, Zorn yells his way through his feelings, revealing that he’s worried he’ll never be close with his son Alan, who spends most of this episode bonding with Craig, the man he feels a stronger connection with. Again, the moment comes from a genuine place, and there’s a rare glimpse of warmth and heartbreak in Zorn’s breakdown. That brief flash of sympathy elicited from emotional depth doesn’t last though. When Zorn tries swooping in to save the day from Meka-Zorn who has turned into a literal ticking bomb, Craig and Alan are ultimately the ones who work together to defeat the destructive robot clone, relying on the teamwork they’ve cultivated through playing video games together to complete a real-life quest. Their relationship wins in the end. Son of Zorn isn’t on Zorn’s side.

So what, then, is Son of Zorn about? It’s becoming increasingly unclear. It’s not the smart, critical send-up of toxic masculinity implied by its premise. And it’s not about a fish out of water learning to change his ways. It’s about a bad dad, a controlling ex-husband, a man-child, a father truly ignorant about who his son really is. That premise doesn’t lend itself well to comedy, especially within the trappings of a conventional family sitcom. Even the technical aspects of the show’s premise hold it back. Beth Dover, one of television’s ubiquitous but very underrated comedic actresses, plays one of the friends, and even though the dialogue in the lunch scene is a little stilted, it has its funny moments. It’s a reminder that overall, the actors on this show are much better at making the comedy land when they’re not having to act up against an invisible, two-dimensional character. Son of Zorn’s entire premise sets itself up for failure.

Fittingly, in “A Tale of Two Zorns,” Zorn has to fight himself.