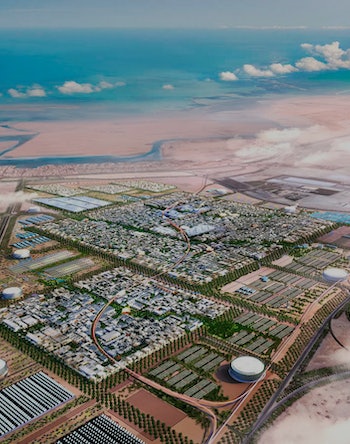 Between Abu Dhabi International Airport and a well-heeled Emerati suburb, a new satellite city is emerging from the desert. When the sandstorms don’t cast it into shadow, the labyrinth of interconnected, clay-colored buildings that form Masdar City represents a bright, shining example of what sustainable architecture can accomplish in a warming world. It also represents a multi-billion dollar gamble.

Megacity developments are all the rage across the Middle East, but sustainability and environmental impact are typically an afterthought. The oil-rich United Arab Emirates in particular has been criticized for trashing the marine ecosystem off Dubai in order to construct an archipelago that resembles, if you get dizzy and squint, a world map. So when Abu Dhabi announced plans for Earth’s first carbon neutral city, environmentalists were excited, skeptical, and confused. Masdar City is — literally and figuratively — an outlier.

Named after the government-owned renewable energy firm developing it, Masdar City is the UAE’s attempt to demonstrate its green bona fides to the world. It also happens to be a sort of Epcot Center for urbanists. This is where theories, technologies, and sustainable systems will be tested in one of the planet’s harshest environments. With an investment of $22 billion from the UAE government, the city’s creation is more than just an academic exercise.

Ambitious plans set out by the prominent British architectural firm Foster and Partners in 2007 outlined the development of six square kilometers of shops, offices, and apartments — all to be built with a small carbon footprint and an emphasis on sustainable design. By 2025, Masdar City aims to be home for 40,000 people, with a further 50,000 commuting into the city each day. For now, the Masdar Institute of Science and Technology is the notable hub, with around 80 academics and 400 students spending their days at the institution.

“MIST embodies the sustainable principles and goals of the whole Masdar project,” says Gerard Evenden, senior executive partner at Foster and Partners. “It’s the educational heart of Masdar City and the first part of the masterplan to be realized. So far, MIST has been active in sustainability research, such as exploring alternative forms of transport and potential new sources of power.”

Acting as a 50-ton air conditioning unit, Masdar’s solar thermal cooling plant is an example of such a power source, using the sun’s energy to trigger a chemical reaction that chills water despite the scorching climate. The system then pumps cool air into buildings across the city. The Masdar development also features a 148-foot tower that diverts wind from the Persian Gulf down urban backstreets, spraying a cool mist as it goes. Masdar harnesses the desert sun through a 10 megawatt solar farm, while solar canopies hang from rooftops to provide much-needed shade. Features like this have led to Masdar being called a blueprint for humanity’s urban future.

“Sustainability in Masdar is not on an individual basis — it’s about the community as a whole, not just the residents, workers or buildings alone,” says Yousef Ahmed Baselaib, executive director of Masdar’s sustainable real estate division. Integration is always a crucial component: transport, walkability, infrastructure, business, retail. These are the things that make community possible and a city truly livable.”

But achieving an integrated city is about more than just creating an appealing, interconnected space. Clustering offices, apartments, shops and entertainment centers together is key to the developments plans to offset fuel and carbon emissions, as it means that residents will spend less time traveling to shopping areas or commuting between work and home.

“People move around Masdar on foot, by bicycle or using the personal rapid transport system [a type of self-driving electric pod], which is a much more sociable way to explore a city than being confined to a car,” Evenden explains. “Masdar challenges the way cars have been allowed to shape our cities.”

Despite its undeniably impressive vision, today Masdar City is over-budget and behind schedule. Funding has proved challenging since the global financial crisis in 2008, and only a fraction of Foster and Partner’s initial plan has been implemented so far. The anticipated completion date for the project has been pushed back repeatedly, from 2015 to 2020, and subsequently to 2025. Meanwhile, the original aspiration to build a “carbon neutral” city has been reframed as an intention to build a “low-carbon” city.

But these disappointments aren’t stopping the energy firm behind Masdar from exporting their sustainable innovations to other areas, demonstrating the wider value and impact of the Masdar development. Last month, the prime minister of Jordan agreed to the construction of a 200 megawatt photovoltaic farm outside of Amman, following visits to Masdar by senior ministers at the start of the year. And the company behind Masdar is already halfway through constructing a 32 megawatt solar farm in Mauritiana.

“Masdar has been through a lot of trial and error. As a result, we can tell others not to make the same mistakes we did, and they can build on our impressive achievements,” says Baselaib. “Already we have arranged workshops and are engaged in dialogue with Russia and China — showing them what we have done and what they can learn from our work. I have no doubt that Masdar will become the global standard for sustainable urban development.”

While the Masdar project’s goals remain in flux, the city’s importance as a symbol of sustainable urbanism and human innovation remains. Masdar isn’t just a high-tech sandbox, it’s proof positive that governments can be proactive in their planning for a radically different future.