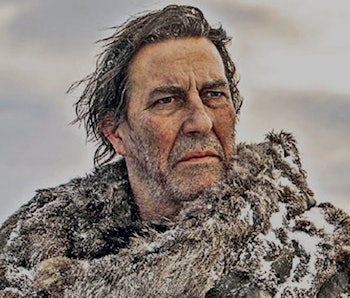 On the heels of dropping an epic trailer for the new Wonder Woman movie, we have finally learned who will play the big baddie, Steppenwolf, in 2017s Justice League – Part 1. Steppenwolf, the underling of Darkseid, will be played by former Game of Thrones actor (who played the leader of the Wildlings), Ciaran Hinds. The film recently wrapped production, and Steppenwolf is said to be a step up from when we last saw him in one of the deleted scenes for Batman v Superman: Dawn of Justice.

When most of us last saw Irish actor Ciaran Hinds, his Wildling-warlord Mance Rayder was being burnt at the stake for not kneeling to Stannis Baratheon following the Wildling fight at Castle Black. When we first learned that Steppenwolf was going to be the villain in the new movie, we were worried that Justice League would once again fail to introduce a complex villain that can add to the story.

However, Ciaran Hinds is a magnificent actor who can definitely put his spin on and improve the Steppenwolf character. He will most likely be the military general leading the army of parademons, like we saw in BVS’s dream sequence.

There have been some upgrades to the Steppenwolf design that we first saw in the BVS deleted scene. He will be a motion-capture character, much like Thanos or Ultron in the Marvel’s Avengers movies. But, this may mean that they are maintaining his alien-like appearance instead of the Viking-like, axe-wielding, human form. But, the motion capture capabilities will hopefully be a large step up from the deplorable CGI Doomsday that we saw in BvS.

Overall, the new DC movies are shaping up to look like something great. The first Justice League film hits theaters on November 17, 2017.

More like this
Culture
5.9.2022 1:30 PM
Exclusive: 'Everything Everywhere All At Once' comic opens up the multiverse
By Isaac Feldberg
Entertainment
5.13.2022 1:00 PM
Strange New Worlds actor reveals why Hemmer is Star Trek’s own “Daredevil”
By Ryan Britt
Entertainment
5.6.2022 2:33 AM
Guardians of the Galaxy 3 actor shares a distressing Nebula update
By Jake Kleinman
Share: