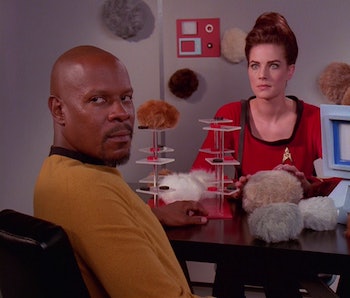 Twenty years ago today, the crew of the starship Defiant traveled back in time 105 years, from 2373 to 2268. Once there, Captain Sisko, Lt. Dax, Chief O’Brien, Worf, Odo, and Dr. Bashir proceeded to prevent the assassination of Captain Kirk by figuring out who stuck an outer-space bomb in one of those adorable little tribbles.

Titled “Trials and Tribble-ations,” this fifth season episode of Deep Space Nine was a sequel of sorts to the original series Star Trek episode “The Trouble With Tribbles.” What are tribbles and what’s the trouble with them? In short, tribbles are adorable, furry alien balls who reproduce at extreme rates to the point that they will overrun your spaceship or space station in an instant. They also purr and are loved by pretty much everyone but the Klingons, who considered them a blight.

“The Trouble With Tribbles” is one of the most popular episodes of the original Trek, and the shot of Kirk in a giant pile of tribbles is perhaps the most iconic image from the entire series.

So, in 1996, during the 30th anniversary of Star Trek, the showrunners of Deep Space Nine created what was essentially time-travel fan fiction, in which the contemporary 1990s/24th century DS9 characters were digitally inserted into the classic episode of the 1960s/23rd century.

Most of this was played for laughs as DS9’s “Trials and Tribble-ations” tackled continuity problems in the Trek-chronology with several winks and jabs. Why do the Klingons in the original series look totally different than the Klingons in the films and latter series? Worf says here, “We do not discuss with outsiders.”

Why are the gadgets of the 23rd century stuck with a 1960s design?Here, Dax calls it “classic 23rd century style.” Sisko makes jokes about the crew wearing opposite colors from what they would normally wear, and Dr. Bashir worries the he might be his own ancestor, ceasing to exist if he doesn’t have sex with someone he meets while hanging out in the past. Later, he and Chief O’Brien even get mixed up in a bar fight with some faux-Klingons, where they are later reprimanded by Captain Kirk.

But, perhaps the best scene in this delightful meta-Trek tribute is when Dax makes it clear who is hotter: Kirk or Spock. As she and Captain Sisko hide in plain sight on the Enterprise, Dax makes it clear she thinks Spock is the one with the sexy eyes. Kirk may have been the smooth operator in Sisko’s mind, but here, Star Trek spoke directly to its fans by reminding everyone that Spock was probably the character that got everyone’s hearts pumping back in the good old days of the 23rd century.