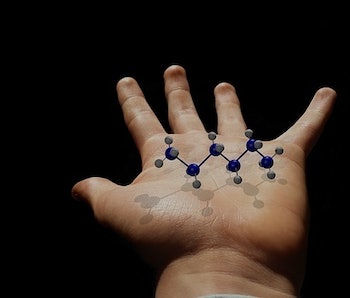 A new artificial intelligence aims to create new drugs by learning what molecules already work and what may fit with existing patterns. The success of the project could mean new applications for the deep learning model working behind the scenes, if it’s shown to work well at identifying patterns in complex natural structures.

“It explores more intuitively, using chemical knowledge it learned, like a chemist would,” Alán Aspuru-Guzik, the Harvard chemistry professor behind the system, said in a report published Thursday. “Humans could be better chemists with this kind of software as their assistant.”

The system’s database hosts thousands of drug molecules, using deep learning to take the data it already has and work out what may fit with existing patterns. This technology, called a generative model, is currently used in autocomplete features for guessing what word may come next.

It’s the latest in a line of A.I. automating jobs without entirely replacing them. In these industries, A.I. helps professionals so they can spend more time focusing on jobs better oriented towards humans. An example of this in action is Luminance’s robot lawyer A.I., which focuses on mergers and acquisitions by checking through documents and flagging up potential clashes. Similarly, IntelligentX can help supplement the work of brewers by collating beer feedback and suggesting new recipes. Human oversight is still needed, but the workload is less.

However, some fear that these systems could lead to widespread unemployment as professionals find themselves surplus to requirement. Stardock CEO Brad Wardell said that he fears new technologies could put up to 50 percent of American jobs in jeopardy.

For Aspuru-Guzik, the A.I. is more akin to an image recognition database. From here, he hopes to feed in records from the American Chemical Society, which hosts nearly 100 million chemical structures, to improve its abilities beyond the test stage. It may not be long before chemists are turning to Aspuru-Guzik’s creation for assistance.

More like this
Science
6.28.2022 10:00 AM
How are drugs absorbed in the body? The science of medicine, explained
By Tom Anchordoquy and The Conversation
Innovation
6.27.2022 8:00 PM
Artificial photosynthesis can grow plants without light — and may solve a planetary dilemma
By Steph Lee
Innovation
6.21.2022 11:00 AM
No, Google’s Deepmind isn’t on the verge of human-like reasoning
By Tristan Greene and Undark
Related Tags
Share: