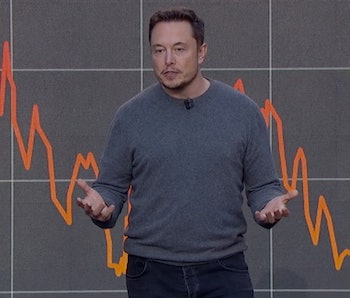 The internet is about to become a vicious, chaotic battlefield, and Elon Musk says advanced A.I. could make the carnage even worse. According to a short exchange on Musk’s Twitter today, the systems that keep the internet running are particularly vulnerable to simple, brute-force computing attacks — the kind of cyberwarfare that artificial intelligence excel at.

On October 21, an unknown group of hackers wiped out part of the internet in the United States and Europe with a massive Denial of Service attack. The hackers used a massive “botnet” — linked computers able to perform coordinated functions — of simple Internet of Things devices to relentlessly overload the servers at Dyn Systems, which provides DNS services to a huge number of websites, including Spotify, Twitter, Netflix, and Reddit. For the most part, cybersecurity authorities believe that a human being or group of people orchestrated and executed the attack, plugging in the botnet’s targets and making sure their digital blows landed. But in the future, Musk says massive DDoS (Distributed Denial of Service) attacks might not need human hackers to wreak havoc on the infrastructure that keeps us all online.

On October 29th, the Economist published an article subtitled “Someone is learning to take down the internet,” which examined the growing phenomenon of DDoS attacks — and why we’re so bad at stopping them. Musk tweeted out the article and added a terrifying caveat — at some point, that “someone” won’t be a person — it’ll be an advanced A.I.

Here’s where it gets a little complicated. Right now, digital attacks like the ones hackers have been using to shut down websites are usually orchestrated by people. But as A.I. gets better and better, Musk says hackers will start using it to optimize their attacks on the internet infrastructure, which is “particularly susceptible” to something called a “gradient descent algorithm.” A gradient descent algorithm, is a mathematical process that takes a complex function and finds the most optimal solution. A.I.s are getting really, really good at doing gradient descents, which would allow them to take a complex process like, say, launching a massive DDoS attack with a huge network of poorly-secured Internet of Things-connected devices and streamline it, optimizing their digital weaponry to carry out the most devastating attack possible.

And here’s the craziest part of it: if both sides (hackers and cybersecurity workers) are using advanced A.I.s, Musk says it could lead to A.I. versus A.I. showdowns in an online battlefield.

Musk is one of the highest-profile members of the tech elite to speak out openly against the unregulated advancement of Artificial Intelligence. He’s not against the technology as a whole, but thinks that attempts to make smarter robots should be open and transparent, to keep out profit-focused corporate influences that could lead to an A.I. takeover. Musk sees computer sentience as an inevitability, but wants to make sure the organic human race is taking every precaution to keep itself on the same level as our machines. Part of that includes something called the neural lace, which would merge organic human brains with A.I. processing power, allowing technology and evolution to stay on par.

But until then, Musk sees A.I. as a loaded gun. Right now, hackers’ offensive weapons, like DDoS attacks, have surpassed many of the traditional online defenses used to keep the internet safe and running. While the neural lace and the specter of a true A.I. apocalypse are both a long way off, advanced A.I.’s dominance of the internet is not.