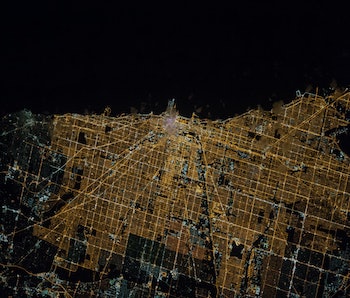 Across the country, Chicago Cubs fans celebrated an 8-7 World Series victory over the Cleveland Indians Wednesday, and even NASA decided to join in on the festivities. In a congratulatory tweet, NASA shared a cool photo of Chicago at night from space.

As you can see in the photo below, Chicago’s downtown area is incredibly well lit compared to the surrounding area (and it was definitely lit last night).

This isn’t the first time NASA has celebrated a major sports victory. In February, astronaut Scott Kelly tweeted a picture of the Super Bowl from space. When Cleveland won the NBA championship in June, astronaut Terry Virts shared a picture of Cleveland with the message “Cleveland !!! #nbafinals2016 #Cleveland #Lebron.”

For the Rio Olympics, NASA astronauts sent a video from the International Space Station rooting for U.S. athletes.

NASA and baseball lovers shouldn’t take Wednesday’s tweet as official support for the Cubs from the national space agency. Like the rest of us, perhaps the space agency just felt compelled to join the national conversation happening online. Scientific evidence shows that normally home field advantage is real, so the Cubs winning in Cleveland is a scientific feat to celebrate.

Even though the Cubs won it all in Cleveland, fans will surely get a kick out of seeing their home stadium from space. If you look the picture below, you can see the stadium marked with an arrow. Wrigley Field has a capacity of 41,268 but from space it’s almost unrecognizable:

This isn’t the first time the Cubs and space have come together, though. Just ask Will Ferrell.