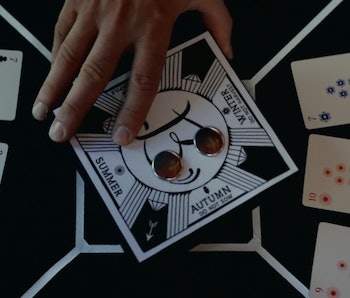 Illimat seems an unlikely game to exist. It very much looks like a card game that might have been played a century ago, but it was originally conceived a few years ago, in its vaguest form, as a prop for a Decemberists photo shoot. It didn’t go much further than that … until now.

Last year, the band’s Chris Funk got in touch with Portland-based Twogether Studios, in order to bring Illimat into the real world via a Kickstarter campaign. With game designer Keith Baker (co-founder of Twogether), the two designed a relatively simple game played with cards, a few tokens, and a rotating box — the Illimat itself, that changes the “seasons” of the gameplay — so appropriate to The Decemberists’s old-world aesthetic that it has a fascinating sense of authenticity.

As Baker confirmed over email, it’s no easy task to create something new that feels plucked straight out of the past, and one of the reasons why Illimat doesn’t feel modern is because it never holds your hand.

It’s a strange thing to say, but one of the results [of making an old design] is that it’s not as easy to play as it could be, Baker says, referencing the game’s special deck of effect cards called Luminaries, which change the game in different ways as they’re drawn.

“In a modern game, I’d expect that text [explaining a Luminary’s effect] to be on the card, making it as easy as possible for a newcomer to pick up the game,” he says. “But, just as Hearts doesn’t come with special instructions on the Queen of Spades, we decided to keep the Luminaries pristine.”

While Baker referenced an 1875 edition of Hoyle’s card game rule book to help with designing Illimat appropriately, he also says there’s a modern concession to design tricks hidden on the Luminaries themselves.

“We’ve managed to offset [the lack of written rules on cards] by working the game effect into the image, he says. When The River is revealed, you deal six cards into the field and so, the image on The River shows six cards floating in the river. Once you know what the card does, the image helps jog your memory.”

Illimat is what’s known as a trick-taking game, like the aforementioned Hearts, where a set of players take turns playing cards from their respective hands in order to try to win the round, or trick. After everyone plays their hand, the winner of the trick is then chosen.

This is crucial, Baker says, to making it feel like it could have been played exactly a century ago, as compared to how games might have looked from an even earlier era.

“The core trick-taking mechanic of Illimat is similar to that used in the games Cassino and Scopa,” he says. “One of the critical elements is that [the game’s] two- to three-player version [primarily] uses a 52-card deck for primary play, closer in style to Cassino, a game that really hit its stride in the 19th century.”

The Illimat itself is another matter.

“Illimat is differentiated both by the use of multiple fields and most critically by the rotating central Illimat, which doesn’t have a clear parallel in the older games,” Baker says. “It captures the general flavor of an old trick-taking game, but with the additional dynamic element of the changing seasons.”

Baker also worked extensively with Carson Ellis, The Decemberists’s longtime artist-in-residence, on the games design and its art. The results look unsurprisingly like relics from the bands strange Old Europe feel, and Baker says the board itself was one of the most unique things about the project.

“There’s four quadrants: What’s the relationship between them? Does each player work with their own field, or are all fields available?” he asks. It was making the board cloth, so it could fold up into the box, that sparked the idea to make the Illimat rotate.

Perhaps most fascinating — and most mysterious — are Illimat’s narrative aspects. When approaching Baker about the idea, the band was determined to keep the “secret society” element as lore; it’s something Colin Meloy has expounded on in a backer-exclusive booklet called Variants & Apocrypha, which details different ways you can play the game, as well as Meloy’s thoughts on the history of game’s Society of Luminaries.

“As a general rule, I focus on game design and Colin is master of story,” Baker says. “[But], we may post some of the variant rules on our website.”

While Mysticism and alternate histories are hardly uncommon in the world of tabletop and card games, few feel like pieces from another time as much as Illimat. By democratizing the game as a real, tangible thing, it has in some ways ceased to be merely an obscure piece of The Decemberists’s own mythos; now Illimat belongs to everyone. Considering its beguiling cultural sensibilities — imagined as they may be — it’s a worthy addition for the medium.

More like this
Gaming
Jan. 22, 2023
OGL 1.2 update: The battle for D&D's future has only just begun
By Corey Plante
Gaming
Jan. 13, 2023
D&D's community is up in arms over a controversial change
By Corey Plante
Entertainment
Jan. 18, 2023
Joker 2 leak reveals the movie’s surprising inspiration
By Dais Johnston
LEARN SOMETHING NEW EVERY DAY.
Share: