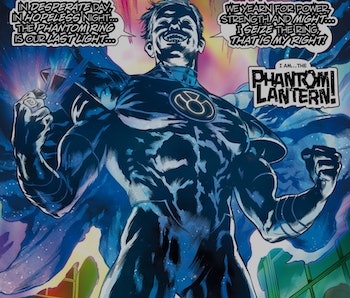 All Frank Laminisk wanted to be was a Green Lantern, but in issue #10 of DC Comic’s Green Lanterns, he gets more than he bargained for: he becomes the first Phantom Lantern. That’s as bad as it sounds.

Laminsk’s debuted in writer Sam Humphries’s Green Lanterns issue #9. And in issue #10, his story takes a shadowy twist when he gets his hands on Volthoom’s Phantom Lantern ring, which allows anyone, anyone to wield and channel any color Lantern depending on their mood. Frank’s oath as a Phantom Lantern is not only badass, but an echo of his character as an obsessed fanboy yearning to become something more no matter the cost.

Laminsk was almost given Green Lantern Corps. membership in issue #9, but the ring “corrected” its “error.” After that perceived injustice, Laminsk became a willing pawn in Volthoom’s mission to exact revenge on the Corps. To get back at them, Volthoom gave the desperate Frank all the powers of the Lanterns.

Check out the oath below, which if it isn’t symbolizing the Phantom Lantern definitely fits Frank as a character:

In desperate day, in hopeless night

The Phantom Ring is our last light

I seize the ring, that is my right!

Jessica and Baz — two rookie Lanterns assigned to Earth while Hal Jordan is busy with affairs in space — were overlooking the Phantom ring until they were distracted by a neighborhood fire (caused by Frank as a diversion). Although they are members of the Justice League, Jessica and Baz have a long way to go until they’re proper Green Lanterns.