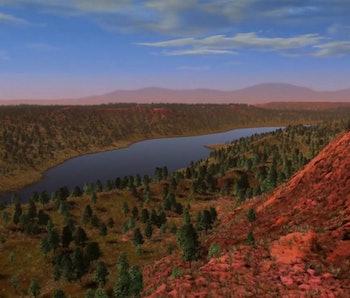 NASA, SpaceX, and other institutions are accelerating their efforts to send humans to Mars, but the overall takeaway is that we’re not going to the Red Planet just for a quick tour. When we get there, we’re staying there. But it won’t be easy: Mars is always just a few short steps away from killing you. If we really want to establish a long-term colony on the Red Planet, we’re going to need to find a way to make it resemble something closer to the warm and fuzzy rock we call Earth.

And that’s where the idea of terraforming Mars comes in. A new YouTube video produced by Life Noggin makes the case for how humans could go about terraforming Mars and transforming it from a cold wasteland into a more amenable environment.

The video outlines four different major obstacles keeping us from making life on Mars an easy and comfortable existence: the thin and carbon dioxide soaked atmosphere, the low temperatures, th lack of a magnetosphere, and the low gravity.

The video concentrates on the first three factors, since they’re all connected with one another. First up, how can we make Mars’s atmosphere better suit our human needs? It’s one percent as thick as Earth’s and is a staggering 95.97 percent carbon dioxide. This means it’s not breathable by humans and does little to ensure the warmth of the sun (already farther from Mars than it is from Earth) is trapped well enough to keep Mars a cozy place (temperatures drop to minus 63 degrees Celsius).

Life Noggin says we might be able to create greenhouse effects by mining methane from rocks on Mars and combining it with atmospheric carbon dioxide endemic to the planet.

Maybe that is feasible, but the video also argues humans might be able to use ammonia derived from busted-up ice-rich comets from the outer solar system. For now, that’s just insane. The idea that we’ll be able to pull in that much ammonia from that many asteroids hanging around the solar system is ridiculous. Life Noggin also says that because ammonia is mostly nitrogen by weight, plants could serve as a useful way to foster an atmosphere similar to Earth’s — but it neglects to explain how exactly this would work and what the connection is.

With a thicker atmosphere to warm the planet, the video says “the rest of the terraforming job will be a relative cake walk” by mentioning we could melt Mars’s polar ice caps to create large bodies of water on the rest of the Martian surface.

Almost immediately, the video backtracks on this suggestion — acknowledging that we haven’t solved the magnetosphere problem! See, a magnetic field helps to repel solar winds and keep the surface from becoming an irradiated hazard zone. Mars used to have magnetic fields that jutted out from the poles — just like Earth — but lost them at some point in its ancient history. The result was that solar winds stripped the Red Planet of its atmosphere and resulted in a fast hemorrhage of liquid water.

The video makes no case for how to rectify this issue — because no expert is even close to figuring out how to recreate a planet’s magnetosphere. “Any atmosphere we do add on Mars won’t last,” the narrator says, “so Mars isn’t the best option” for making a terraformed new world.

The video goes on to outline how terraforming might work — and might fail on other planets and moons in the solar system, and eventually we’re left with the same understanding with which we entered the video: there is no place like Earth. A colony on Mars is possible, but for the rest of this century at the very least, don’t expect it to look much different from the destitute world you’ve already seen it to be.