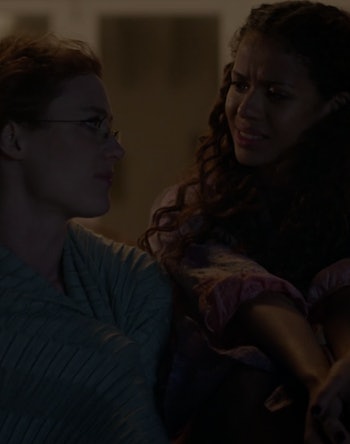 Though Black Mirror is often characterized by its dark and pessimistic takes on our relationship with technology, the breakout episode from the most recent season is uncharacteristically optimistic.

At least, it appears so on the surface.

In “San Junipero”, Kelly and Yorkie find one another in a simulated reality in which users’ minds are uploaded to a sort of cloud — there’s the option for doing so temporarily or permanently — so that they can actively participate in this reality. The alternate reality is set in a coastal town, filled to the brim with dance clubs.

Users can choose which era to live in and can interact with all of the other users in this simulated space, be it at the local bar, Tucker’s, or the much more seedy Quagmire. Beach houses back right up to the ocean and are impeccably kept. It’s a veritable paradise provided you’re looking to escape some kind of pain or suffering in your real life or if spending the afterlife (and achieving digitized immortality) in a simulated reality is your idea of a good time.

On the surface, it seems pretty far-fetched. Uploading our consciousness to a cloud so that we can access a place that doesn’t really exist isn’t something that we might consider to be plausible. But on a theoretical level, at least, it’s possible. In fact, it may even be possible on a practical level, and we’re probably not as far away from living in simulated realities as we might think.

Let’s break the problem down into two major parts: The transfer of our consciousness to a computer and the idea of a robust and realistic live-in simulation that mimics our reality.

For transferring our consciousness to a computer to be remotely feasible, not only would we need a computer capable of handling the computational load of our brains and of replicating the complicated web of neural connections, we’d also need a method for transferring the parts of our brains that make us who we are to a computer: our memories, our unique way of processing information, our personal quirks, all into a digital format. The things we don’t know about the brain vastly outnumber the things that we do know, making building an artificial brain a tough task.

Then there’s a second level of the question of the plausibility of “San Junipero”: the simulation itself.

Elon Musk has offered up the example of the advancement from Pong to today’s sophisticated video games and to virtual reality as it exists now. Even assuming a substantial drop-off in the rate of advancement, it’s not only possible but likely that we’ll find ourselves in a position where we’ll be able to create these simulations that mimic reality. And if we’re capable of it, it’s likely that we’ll do it.

“If you’ve scanned someone’s mind into a computer,” Smoot posited in a TED talk, “the natural thing to do is make an environment in the computer for the scan to live in.”

And this is where things get really weird, because if our natural tendency would be to create these artificial realities and simulations, and the only thing holding us back is processing and programming power, then the script starts to flip. In that same TED talk, Smoot’s objective was to plant a seed of doubt about our reality as we think we understand it, to prove that we’re all already living in a simulation, that we ourselves are simulations. It’s not a new idea, and it’s backed up by probability.

We know that there are innumberable habitable planets in our universe, and that the odds of other civilizations existing is overwhelming. Smoot points out that it takes some next-level hubris to assume that we are the most advanced among them. And if that’s the case, if there are civilizations out there more advanced than us, it stands to reason that one of them has solved the aforementioned ostensibly unsolvable problem.

When it comes down to odds, “San Junipero” isn’t just plausible, it’s probable. We might all be inhabitants of a server farm full of blinking lights that make up something the base reality known to be the “Planet Earth” simulation.