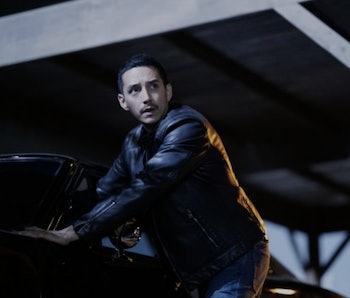 Marvel’s Agents of S.H.I.E.L.D. got new life when it introduced Ghost Rider this season. The famous Marvel anti-hero has been lighting up the show as one of S.H.I.E.L.D.’s most famous superheroes to date, and a new teaser for the next episode will finally reveal Robbie Reyes’s origin story.

For the most part, the show has been faithful to Reyes’s (Gabriel Luna) characterization when the character was first created in 2014 by writer/artist Felipe Smith. As the All-New Ghostrider, Reyes is a Mexican-American high school student forced to raise his only brother. Despite making ends meet working at a local auto shop in Los Angeles, Reyes decides to earn some better money street racing so he can get him and his brother out of their dangerous neighborhood.

Unfortunately, that race ends with a police chase, and Reyes is gunned down by a villainous organization. But death isn’t permanent — his murder triggers a contract with Ghost Rider’s spirit of vengeance.

That’s why the new clip is so surprising, as it hints at a crucial difference between the comics and the show. Reyes’s brother, Gabe, was already in a wheelchair prior to the start of the comic, but the clip shows the Gabe walking about. Now, the show has already shown Gabe in a wheelchair, so it might be a fair assumption to think that Gabe’s disability came as a result of joining his brother during one of his street races. If that’s the case, that’s seriously messed up.

The potential new origin story for Reyes would mean that he probably feels in some way responsible for ruining his brother’s bright future. It might also be a bigger incentive to use his powers to get personal vengeance on whoever might have led to his brother’s accident and whatever turned him into Ghost Rider. Because in the comics, the only reason Reyes turned into Ghost Rider in the first place was because he died, so it’s probably fair to say S.H.I.E.L.D.’s Reyes was also killed at some point.