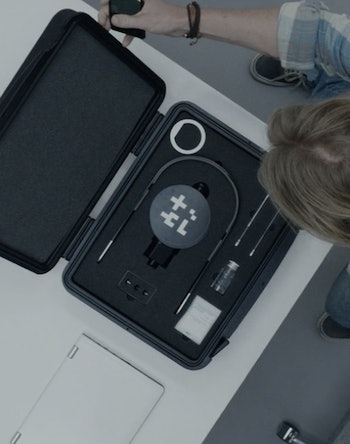 The near-future technology depicted in Black Mirror can control minds and perpetrate mass murder, but none of the show’s speculative devices looks all that complicated. The forms are consistently simple, which augments the horror of the functionalities. These are the most easily abused weapons imaginable.

When imagining new technologies for Season 3, the show’s producers and designers had to meet very different demands. First and foremost, they had to create gadgets that wouldn’t distract from the story. They did this by thinking about consumer tech companies as well as engineering and asking this question: How would future hardware companies design trojan horse products for the mass market?

Longtime series production designer Joel Collins puts it even more bluntly: “It has to be really simple because we’re the ones misusing it and abusing it. The humans are telling the story.”

The six new episodes currently on Netflix continue the Black Mirror tradition of presenting hardware and interfaces with an aesthetic simplicity that belie their terrifying capabilities. “Nosedive,” which Brooker described as taking place 5 to 10 years from now, imagines a new social media network and set of physical controls used to navigate it. It is like Tinder, but for rating literally everything about a person. It offers a constant flood of data both for the user in the film (Bryce Dallas Howard) and the viewer at home. Collins says that idea led to a crucial design question: “How much information do you get on there?”

Collins points out that it had to be more than current social networks, but that there’s also a limit to how much a human can scroll through. It became a balancing act. Collins said he imagined at one point a user being able to scroll three different directions at once, though the network’s presentation — a thin blue or pink phone — was significantly pared down.

“We went through lots of different iterations, and every time the interface on the phone was getting simpler,” Brooker says. “Most of the time it’s black text on a translucent background on her phone, because there’s a confidence to that.”

Then they had to figure out how people would interact with that comforting presentation. “We had a lot of conversations about the gestures they do, the logic of them,” Brooker said. “Sometimes it was a ring you’d wear on your finger, which is visually interesting but you’d say ‘I wouldn’t use that,’ because you’d be worried about it dropping or it snapping.”

So a wearable device was out of the question, as was any sensor that required big, bold movements. “If you’re flailing your arms around, people would be like, ‘What the hell is this guy doing?’” Collins laughs. That’s part of the reason they ultimately landed on something more natural, which made it both easier for the viewer at home to buy into the story, and for characters in the story to accept.

“We decided on swipe and casting and there’s always a logic to it,” Brooker said, describing the subtle movements that everyone in the episode performs on their phones as they absentmindedly rate their peers. “And at the end, when she doesn’t have her phone, she is operating on muscle memory when she tries to swipe and cast.”

The rest of the episode’s design was rooted in the warmth of the social network interface and the chilling effect its rating system wrought on society. It looks like a modern day Pleasantville, the sort of town that Jim Carrey is trapped in throughout The Truman Show with well-catalogued conformity everywhere.

“Everything’s off a mold, because people are afraid, and want to not risk offending,” Collins said. The cars are all boxy — they look like Nissan Cubes — and different shades of boring, too. “I think if you all have almost the same items, but with your own splash of individuality, you’re not risking putting yourself out too far to get a down rating. Aspirations are so limited and the cars are the same.”

Fascinatingly, Collins and Brooker put a lot of effort into imagining the design of future technologies even when those technologies are never visible to the Black Mirror audience.

In the episode “Man Against Fire,” for instance, the army is able to directly upload information into soldiers’ corneas, giving fighters access to a wealth of information and an advantage on the battlefield but also altering how they see the world. The guiding principle in that episode was to never really show any sort of physical uplink port on the soldiers’ heads because doing so might take away from the viewer’s natural suspension of disbelief. That does not, however, mean that the production team did not think through how the technology might work.

“The images are created by sending out a device which pulsates and pieces together a map that gives them information to use,” Collins said. “It’s very much like virtual battle planning. They can’t really change anything there, but it’s more still information in the eye.”

That the information was projected, and not interactive, is a key point, and one that might be lost on viewers. In the episode, the army can control a soldier’s memory, but the soldier cannot manipulate any of the information uploaded into his eyes. They can only swipe through it with special heat-sensing gloves that connect to sensors, allowing them to flick through but not control their reality. It’s like a read-only file, turning people into potential killing machines, a technology that follows in the footsteps of the terrifying brain-washing tech of A Clockwork Orange.

It may seem far-fetched, but Black Mirror has a solid — and terrifying — track record of predicting the future. “When we started, sometimes Charlie would say, ‘What would this tech be like in five years?’” Collins recalls. “Now, it’s all there, so a lot of that we were just ahead of it and it caught up with us and it is moving slightly beyond us.”