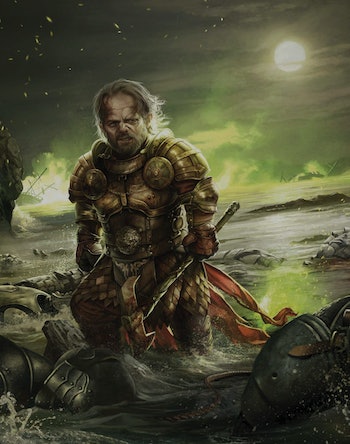 It’s a tribute to the enduring power of the Lannister family that Magali Villeneuve’s full-color illustrations were included in the 896-page gilded, hardcover collectible edition of A Game of Thrones released to celebrate George R.R. Martin’s 20th year as lord of the Lands of Ice and Fire. It’s a further tribute that the book should wind up the 20th anniversary box, along with an iron coin of the Faceless Man, passwords for a Living Language Dothraki course, and, fittingly, a reproduction of Robert Baratheon’s will. Magali’s work belongs with this loot. When she’s not wandering the villages of northeast France, Villeneuve is exploring Westeros, where she has become a court painter for House Lannister, capturing dead, misdeeds, and quite few secretive conversations.

Villeneuve fits in well in King’s Landing. She’s a fantasy head who dreamt of working as a Disney animator before she cracked into the Wheel of Time series by Robert Jordan. “It was a whole new world and I started to understand that I wanted to draw from books,” she recalls. “My goals changed.”

Today, she’s a well-known and widely respected illustrator with a particular specialty in capturing the realpolitik and very literal castle intrigue spinning around the giant Westerosi throne. She has become, in a sense at least, the Lannister’s court painter. And, yeah, she digs the job.

Inverse spoke to Villeneuve about her art and the family she’s best known for capturing.

How did you get your start painting the Lands of Ice and Fire? That’s got to be a hard job to get.

One day I was in a library and I found that Fantasy Flight Games has published an art book showing all of their Game of Thrones illustrations. I was thinking that it must be very cool to work on that and my husband said he thought my work compared favorably. I sent my portfolio in and … it was okay. They liked it.

I have to say that day is a wonderful memory. I was so excited that I’d be able to tell people I did one illustration for Game of Thrones. I’ve done way more than one now.

As an artist, you’ve been all over Westeros. Which characters have you most enjoyed capturing? Which ones do you feel like you handle best?

I’m drawn to the Lannisters. I love this family. I love how sophisticated and complicated they are. I’m someone who really loves to paint relationships and that’s something I find fascinating in Game of Thrones and why I find myself so at ease in this universe. It’s about human relationships. That’s the interesting part to me, not the war or the dragons as much.

Has the way that you portray them changed over the years?

I think my vision evolved through the years with my style, but I have a very precise idea of what they look like to me. I think even the first Jamie I drew years ago has some common points with my current ones.

What creative freedoms do you take when youre capturing famous people?

I guess when a book is as good as this one, it gives you really strong images you want to recreate. That kind of thing doesn’t happen when the book isn’t that good. Everything is there. I do not have the impression I’m adding everything. It’s not like Lord of the Rings. In that case, it is easier for me to insert details because Tolkien wasn’t about describing his characters. It’s blurry and not very precise. There’s more for an illustrator to add … not so with Game of Thrones. There is a description for everything and everyone.

I think that’s why the show seems right. What’s important to me is how the characters feel. I think they feel right.

Do Lannister loyalists ever complain about your work?

The main pressure there comes from the audience. My art is official in a way so I’m supposed to be as accurate as possible. But my vision will never be everybody’s vision so it is a bit frightening to come up with a face.

It’s all about realistic details. Aging is interesting, so is creating family likenesses, which is something I’m really trying to work on. With the Lannisters, there needs to be something common among them. So I try to make a character look the same in all the illustrations and also make sure there are commonalities in every illustration.

Do you always try to make your subjects beautiful?

In terms of making them all look good, it’s generally just a good idea. When I was working on the 20th anniversary of Game of Thrones one of the people art directing me said, ‘All your characters are pretty, so make an effort on this character and this character to make them less beautiful.’

Thats not easy when you’re a fantasy illustrator.

The Lannisters have been through some nasty stuff. Is there anything you’ve avoided depicting?

I’m not at ease with violence. What I like to do is to draw what happened just before or after the moment of violence. The big fight between the Mountain and the Red Viper — I love that moment, and I really wanted to do that so I chose to show a little before all the blood and all that. Also, when I painted Joffrey’s death, it was more about the feeling of the scene than the harsh reality. So I chose to concentrate on Cersei’s expression rather than just Joffrey dying horribly.

How do you work? What is your medium?

I gave up on traditional mediums. I couldn’t make it without a digital technique. But the techniques are actually very close, which is why I’m a slow painter. I have a pretty traditional technique. Thats also why I think my illustrations are so detailed.

My main sources of inspiration is Italian painters, the Caravaggisti, who did really dramatic work. It’s very difficult, but I think that’s it’s appropriate because it conveys such dramatic atmospheres.

That is probably the best way to capture life in King’s Landing.

It’s what I’m trying to do. Always trying.

Click here for a free wallpaper download of art from the 20th anniversary illustrated edition of A Game of Thrones.