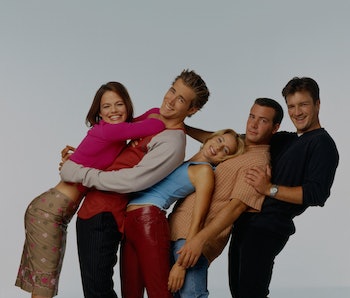 Years before Ryan Reynolds was the foul-mouthed Deadpool in a movie that grossed $780 million in the dead of February, he was a sitcom star on Two Guys, a Girl, and a Pizza Place. Airing at the tail end of ABC’s TGIF era, the Friends alternative was celebrated for its razor wit and the cast’s electric chemistry, even if it was still about attractive young adults who — get this — are struggling to figure out where their lives are going next.

But in the show’s first Halloween episode, “Two Guys, a Girl, and a Psycho Halloween,” the saccharine sitcom turned grotesque, upending the safe, wholesome space of network TV with the goofy Berg, played by the devilishly handsome Reynolds, taking out his friends like an ‘80s slasher. And it ends in a punchline about corporate network synergy.

In the Season 2 episode, Pete (Richard Rucculo) and Berg throw a Halloween party in their Boston apartment. But just before, Berg, a med student, is doing evening rotating at the morgue with a rival, Kamen (Maury Ginsberg). They can’t stand each other, to the delight of the studio audience laughing at their comebacks. But when Berg fails to extend an olive branch, he does something way out of character: He kills Kamen with an axe to the chest. The moment is punctuated by silence from the studio audience.

The rapid-fire jokes were nailing until Kamen’s murder, but Ryan Reynolds’s killer charm and comedic timing, which defined his time on network television, shepherds the audience into the premise without shock: Berg is berserk, and his sitcom friends aren’t safe. Thus begins “Two Guys, a Girl, and a Psycho Halloween.”

At the party, Pete pleads to Berg to be useful and get the keg from the pizza place, their mutual place of part-time work and space for every episode’s shenanigans. Berg uses the errand as an excuse to take out his friends one by one, including Ashley (Suzanne Cryer), the only girl to resist Berg’s charms.

As the herd thins, Pete heads to the restaurant to get the keg only to learn the Berg they’ve seen all night is a doppelgänger. The slasher plot morphs into a copycat thriller, ending with Pete as the “Final Girl.” (And not Traylor Howard’s Sharon, the actual “Girl” of the Two Guys. She is killed offscreen.)

Pete kills the evil Berg — the only other character to kill anyone in the episode — only to realize he killed the real one.

After a few blunt bashes, Psycho Berg, rotates his axe to the sharp end — another moment where the audience is silent — before landing a final stab on Pete. The violence, obscured by the restaurant counter, is classic cinema horror wherein the audience fills the violence with their imagination.

With his dying breath, Pete asks who “Berg” really is and why he’s killed them, and it’s the only joke that is definitively ‘90s: “Berg” is Mimi from The Drew Carey Show. Why? “Because now I have my own show!” Kathy Kinney’s heavily mascara’d character proclaims. “And all the free pizza I can eat.”

Drew Carey was one of Two Guys’s contemporaries that also typified early millennium ABC. If it were 2016, Kathy Kinney’s guest spot would engender theories about the shows’ shared universe, but in 1998, it was a joke, a gag about a network doing a goofy stunt for laughs.

Though the episode spent its 22-minute runtime towards a joke about branding, the fact is that everyone died. In the credits, where usually there’s one last punchline to wrap up dangling threads, every locale is abandoned and desolate, underscored by a howling wind. Pete’s apartment, the pizza place; there’s nary a soul in sight.

What keeps “Two Guys, a Girl, and a Psycho Halloween” apart in a medium that is today remarked for its obsession with violence and devotion to continuity was its boldness to just kill characters for fun. And it did so without becoming really dark or visceral. It was still a sitcom, and even the revelation is made for laughs.

The maturity of TV has outgrown fillers where anything goes, and Two Guys, a Girl, and a Pizza Place embraced that throughout its short four-season lifespan even when it wasn’t Halloween. There were episodes like “Two Guys, a Girl, and Barenaked Ladies,” where the alt-rock band Barenaked Ladies narrate every character’s emotions via song; the bottle episode “Sunday in the Apartment” that gave no actual reason why everyone is stuck in Pete’s apartment except happenstance; and “The One Without Dialogue”, a stab at Friends that had no lines of dialogue but tells its story through silent film-style vignettes.

“Two Guys, a Girl, and a Psycho Halloween” is an episode that would have no place on any show today, and that’s what makes it so unique and just a little frightening.

More like this
Entertainment
Jan. 24, 2023
The Last of Us Episode 2 feels like the video game, and that's why it's great
By Eric Francisco
Culture
Jan. 26, 2023
Michael J. Fox’s strangest movie remains a stupid, ridiculous joy
By Mónica Marie Zorrilla
Entertainment
13 hours ago
7 DC Movies and TV Shows We Won't See Under James Gunn
By Eric Francisco
LEARN SOMETHING NEW EVERY DAY.
Related Tags
Share: