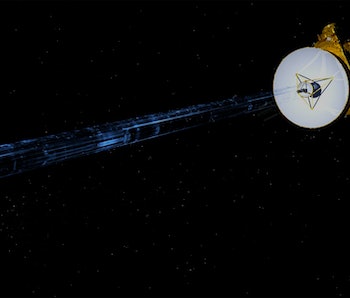 Fifteen months ago, NASA’s New Horizons spacecraft revealed Pluto to the world. Now, the piano-sized spacecraft is headed towards a new target: 2014 MU69, about a billion miles beyond Pluto. Before it visits this unseen world, the intrepid space explorer completed its primary task of beaming back all the data collected during the historic Pluto flyby to clear its memory in time to collect another trove of never before seen data.

Currently, New Horizons is approximately 3.4 billion miles from Earth. It takes roughly five hours for any signals to traverse that distance and reach us. These last bits of Pluto flyby data reached the hands of mission controllers at the Johns Hopkins Applied Physics Laboratory (APL) in Laurel, Maryland, early Tuesday morning.

“We have our pot of gold,” mission operations manager Alice Bowman of APL said in a news release.

In total, over 50 gigabits of information were collected during the 2015 flyby. It took over a year for all that data to trickle in over NASA’s Deep Space Network, as the spacecraft had to share air time with other space missions, as well as conduct maneuvers to prepare for its extended mission.

The mission managers knew this would be a slow process, so they prioritized the data downloads, making sure the high-profile data sets were delivered just after the flyby. The mission’s principal investigator, Alan Stern says there’s still a lot of work to do in order to digest and analyze the 400-plus data sets the probe has sent back.

“The Pluto system data that New Horizons collected has amazed us over and over again with the beauty and complexity of Pluto and its system of moons,” Stern explained.

This final Pluto data dump marks a major milestone for the New Horizons mission. Currently, the team is preparing for the spacecraft’s next objective: a close encounter with another icy space rock in 2019.

New Horizons is currently racing towards the small, ruddy world of 2014 MU69 (and hopefully the rock gets a new name sometime soon). It should be making its arrival in a little over two years, and ring in the 2019 New Year by visiting a world we never knew existed until two years ago. The probe will soar just 2,000 miles above 2014 MU69’s surface as part of an extended mission that NASA approved this summer.

Bowman says the team is currently reviewing the data to make sure it’s in good shape before they wipe the probe’s onboard memory, making room for a whole batch of new science.