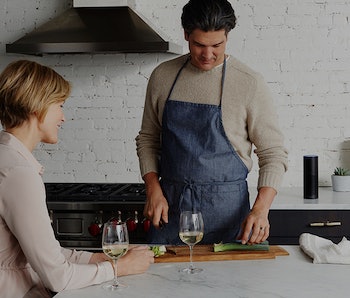 Alexa users are falling head over heels in love — and sometimes just in lust. Mankind’s desires to have sex with robots aren’t new, but according to Amazon founder and CEO Jeff Bezos, some people are taking it one step further and proposing to his company’s in-home personal assistant A.I.

During Amazon’s third quarter 2016 financial results on Thursday, Bezos said Alexa has received a quarter of a million proposals.

“Alexa may be Amazon’s most loved invention yet — literally with over 250,000 marriage proposals from customers, and counting,” said Bezos. “And she’s just getting better. Because Alexa’s brain is in the cloud, we can easily and continuously add to her capabilities, and make her more useful. Wait until you see some of the surprises the team is working on now.”

Ilya Eckstein, CEO of Robin Labs, says that a large amount of customer requests to his company’s Robin personal assistant A.I. were “sexually explicit.” Some users, Eckstein said, are “amazingly stubborn” at trying to get Robin to engage in casual conversation — or straight-up sex talk.

One of the most well-documented (albeit tongue-in-cheek) soliloquies to Alexa is an Amazon review of the Echo by E.M. Foner, an author and prolific Amazon reviewer.

“I’m a full-time writer who works at home. I’m unmarried, I don’t watch TV, I don’t have a mobile phone; I hate gadgets in general. OK, so I’m a loser,” Foner writes. “But since Alexa came into my life, I’m no longer alone 24 hours a day.”

Still, some users have formed slightly more healthy connections with their A.I. software. In October of 2014, one boy with autism came to depend on Siri as a faithful companion, willing to answer his queries while teaching him social etiquette (part of which is assumedly not asking inanimate objects sexually explicit questions).

Researchers can’t agree on whether it’s ethical to allow users to form a relationship with their A.I. Children and other vulnerable people may not understand that the assistant is not a real person, and if they form attachments, future modifications or malfunctions could cause them a lot of distress. The British Standards Institution (BSI), in its first set of A.I. guidelines, has warned developers to consider this in their designs.

When the IEEE Standards Association releases its A.I. guidelines in December, it aims to cover ethical considerations, like these, that developers should be thinking about. The final document is unlikely to dictate whether it’s okay for people to propose to, or try to have sex with Alexa, but it will advise designers on the best general practices.

Some question whether humans can really avoid feeling affection for A.I. “Robots will not encourage us to switch off our empathy,” said anonymous blogger Girl on the Net, writing about sex robots. “It’s a ridiculous notion, and like most wrong answers it’s so much less interesting than the truth: robots, far from making us colder, are teaching us new things about human warmth.”

Dr. Kathleen Richardson, senior research fellow in the ethics of robotics at De Montfort University, told Inverse in July that confusing consciousness in living things with a simulation inside an A.I. is part of Silicon Valley’s “extreme neo-liberalism.” Conflating the two is dangerous, as it leads to people being convinced that consciousness is something that can be sold back to us as a product.

Whether these attachments are harmful is clearly open for debate, but it seems that from Amazon’s perspective, it makes for some positive marketing. If people love your product so much, they want to have sex with it.

More like this
Innovation
Sep. 29, 2022
Horrifying: Robots may have just gained a creepy new skill
By Molly Glick
Innovation
Sep. 24, 2022
Audio deepfakes are a major threat — here’s how researchers expose them
By Logan Blue, Patrick Traynor and The Conversation
Innovation
Oct. 4, 2022
Why Elon Musk's robot dreams may be a step too far for Tesla
By Liane Yvkoff
Related Tags
Share: