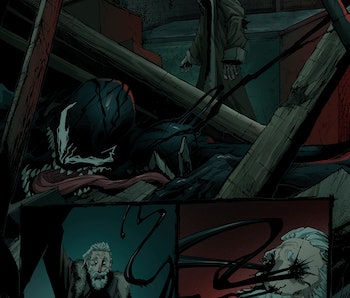 Everyone’s favorite murderous alien symbiote, Venom, is back in an all new solo comic. Marvel is teasing a return to pure evil for the character, including an all-new host, and the previews are stunningly gory.

Currently, the Venom symbiote is bound to Flash Thompson, a U.S. secret agent, Guardian of the Galaxy, and one-time classmate of Peter Parker’s. He wears a weaponized version of the suit for missions on behalf of Earth and the Guardians, and for the most part doesn’t seem to be affected by the symbiote’s homicidal tendencies.

But that’s all going to change in the new Venom comics by writer Mike Costa and artist Gerardo Sandoval, who will be bringing a new version of the character back to the dark alleyways of New York City. Venom is far from outer space, and replete with a new host — but we don’t know who’s in control.

It’s unclear exactly how the symbiote ended up underneath all that rubble, but it was a bad night for that unfortunate bystander who came across the Venom carcass.

We see scenes of Flash Thompson’s time with the Symbiote, where he adopted the suit after being gravely wounded in combat. As Space Warrior Venom, he joined forces with the Guardians of the Galaxy and Spider-Man as a force for good, even if he was still technically under constant threat of being consumed by Venom.

While it’s unclear whether Thompson is still wearing the Venom symbiote, it’s obvious that his time as a good guy is over. Venom is back, and more evil than ever.

Venom #1 will be in comic book stores and digital marketplaces November 23, 2016.