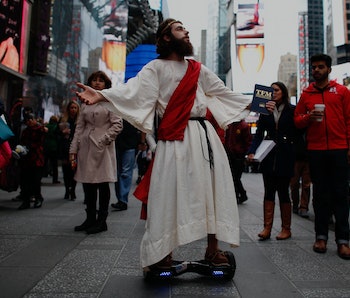 There’s no doubt that memes, the bread and butter of online culture, have become a worldwide phenomenon over the past couple of years, but now, they’ve almost become a religion. According to Google Trends, more people are searching for “memes” on the search engine than holy icon “Jesus.” It may be sacrilegiously hilarious for some, but the data also displays the salient effects of memes and the internet have had on culture.

While every social network has a different function, memes can be found on practically every single one of them. These images, jokes, and ideas are not only spread through the likes of Facebook and Twitter, but also between the various online spaces. Think of it as cross-pollination between platforms. Memes have extensively impacted how people communicate with one another. They’ve been used to build friendships, flirt, and spread information. Likely adding to memes’ recent popularity is how involved they’ve become during the current election. With everyone talking about the alt-right co-opting Pepe the Frog to support Donald Trump, people were undoubtedly turning to Google for answers.

Meanwhile, Christian faiths that believe in God and Jesus have been on the decline according to the Pew Research Center. The drop in numbers is pretty noticeable with young adults, the demographic that understands memes the best.

Twitter user Kuwaddo noticed the Google Trends data and their tweet has blown up since being posted on Tuesday morning.

Search interest in “Jesus” seems to spike up around Easter and Christmas every year, but the graphs show that “memes” first surpassed Jesus in late June and are still on top as of early September.

Comparing variations of the terms like “meme” or “Jesus Christ” further illustrates that there is more enthusiasm and inquiry about internet culture than about sects of a religion that believes in the son of the Virgin Mary.

It even looks like “God” himself will soon be ousted by memes.

Other social networks also confirm this trend. On Instagram, as of Wednesday morning there are 13,091,625 posts hashtagged with #jesus. But #meme isn’t far behind, with 12,912,976 posts.

This information shows a major shift in what people are searching for, but it also proves that people are looking for more material on creations bred by the internet than the arguably most revered religious figure in history. As people’s lives intersect with their online ones more and more, it makes sense that Jesus would be overthrown by the likes of anthropomorphic frogs and his friends.

More like this
Science
11 hours ago
Why ChatGPT Could Usher in a New Era of Scientific Discovery
By Brian Lucey, Michael Dowling and The Conversation
Gaming
Jan. 25, 2023
"Mindboggling" Launcher layoffs prompt outcry and tributes to WaPo gaming vertical
By Jess Reyes
Culture
Jan. 22, 2023
Amazon's selling a ton of these cheap things that make your home so much cooler
By Rebecca Martinson
LEARN SOMETHING NEW EVERY DAY.
Related Tags
Share: