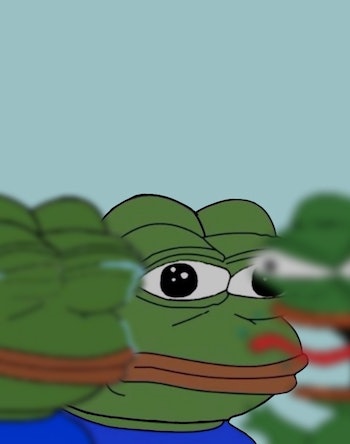 Pepe the Frog is an icon for denizens of the danker corners of the internet. Originally a character in artist Matt Furie’s comic strip Boy’s Club, Kermit’s heir apparent evolved into a massively recognizable meme over the following decade. Pepe inspired fan blogs, Instagram accounts, commemorative apparel, and lots of original artwork. An economy grew around him once people realized they could cash in on his popularity and countless forms, otherwise known as “Rare Pepes.” Then those Rare Pepes started to get less rare and more political.

Earlier this year, Pepes started to appear on alt-right blogs and message boards sporting “Make America Great Again” hats. Pretty soon some Pepes had grown Hitler mustaches and biblical types were talking about the three evil, frog-shaped spirits foretold in the Book of Revelation. In September, the proliferation of racist, anti-semitic, and xenophobic Pepes convinced the Anti-Defamation League to classify Pepe as a hate symbol.

But Pepe and his numerous personalities refuse to be any one thing. If the cartoon symbolizes any one thing, it seems to be internet culture’s ability to endlessly repurpose a simple idea and entrepreneurs’ determination to profit on each iteration. What Pepe means for a certain group seems to have little effect on how he is perceived by those outside of it. Naturally, peer-to-peer e-commerce platforms like Etsy and Redbubble remain thick with products bearing his likeness. (Etsy declined to comment on Pepe specifically for this story, but they do have guidelines prohibiting items that support hate.)

“It’s a sad joke and borderline censorship,” Redbubble seller “Boxsmash” says of the ADL classification. “Pepe is a universal symbol representing the common man in everyday situations; created to share your thoughts or elicit a response.”

Boxsmash has a whole section of his store devoted to Rare Pepes, with 10 versions of the frog available to put on sweatshirts and V-necks. A few of Boxsmash’s options can also be printed on cell phone cases.

“I don’t think anyone has taken Pepe’s addition to the ADL seriously — it’s a farce,” Boxsmash says. “However this allows people/corporations in future to enable suppression of Pepe memes, which is terrible.”

Boxsmash adds that his Pepe sales have been stable. The only trend he has seen is an uptick in “Sad Pepe Pattern” purchases. He thinks its coincidental.

To contextualize Boxsmash’s revenue, it’s helpful to understand Pepe’s history. Pepe spent the better part of a decade hopping between various message boards and 4chan before finally making a splash. That happened in 2014, when Pepe started showing up more on Twitter and Katy Perry introduced him to her 93 million followers in a post expressing her feelings about jet lag. People started to created more and more Rare Pepes.

Then, in March 2015, somebody dumped more than 1,200 variations of the meme on Imgur. In fact, some of the divisive Pepes that the alt-right use can be found in this huge Pepe dump. This Pandora’s Box full of Pepes illustrated how flexible the meme was. Google search interest surged. At that point, the 4channers’ sense of ownership couldn’t stop their prized frog from going mainstream. Nothing could stop his rise or the inevitable commercialization that followed.

As for the ADL, the non-profit organization has a very long list of hate symbols that includes, along with swastikas and SS insignias, the number 14. Theres some parallelism here in that the number 14 definitely can be a racist symbol — it’s numerical shorthand for “We must secure the existence of our people and a future for white children” — but it doesn’t have to be. It’s a common number for wide receivers in the NFL. It’s on jerseys worn by kids who root for Cody Latimer of the Denver Broncos; not all of them are anti-miscegenationist.

Pepe’s non-racist supporters argue that his visage can be similarly innocuous.

“I would say Pepe’s the most popular out of mainstream memes, everyone knows who he is,” says Etsy shop owner YungTide. “For me, I’m just out here looking for what’s hot and providing products to people who wouldn’t be able to find them in stores.”

YungTide’s shop currently only has one Pepe shirt that he used to sell lots of, but sales have recently gone down. Instead of blaming the alt-rights co-opting of the meme, he think it’s simply due to oversaturation. Between internet bigots crafting offensive Pepes, Hillary Clinton’s website publishing an explainer, and the media covering all the Pepe discussion, even die-hard Pepeheads can be excused for moving on.

Those who have already made their purchases aren’t ready to throw the frog out with the swamp water. Carson Somerville, a 17-year-old from Jeffersonville, Indiana, bought his Pepe T-shirt before the ADL classified Pepe as a hate symbol, continues to wear it just for that.

“Nobody has said anything to me about it hate symbol wise, but my dad has encouraged me to not wear it. He doesn’t want people to get the wrong idea I guess,” he tells Inverse. But I think it’s ridiculous because I just I always just thought of it as a funny picture with no real meaning.”

The alt-right will likely continue using Pepe to promote their own political agenda. But at the same time, fans of the meme will continue to love and embrace Pepe because he means something totally different to them — whether that’s making a buck off of putting on T-shirts or wearing the apparel themselves. There’s still a perfect Rare Pepe for every situation.