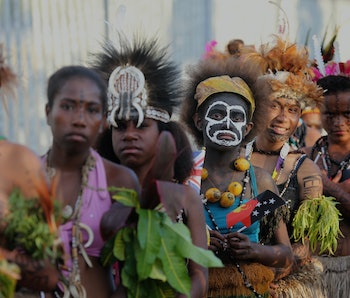 A tiny population of Pacific Islanders have been hiding evidence of a previously unknown, long extinct human relative in their genes. The people of Melanesia — populating the sunny islands stretching from Fiji, south to New Caledonia — carry fragments of DNA that can’t be traced back to any of our known ancestors.

That’s the news in an October 20 report presented during the annual meeting of the American Society of Human Genetics. The findings hint at the idea that there’s a branch of the family tree we have yet to uncover.

It’s a groundbreaking, genetic analysis, and the work of Ryan Bohlender, Ph.D., a statistical geneticist at the University of Texas MD Anderson Cancer Center in Houston. He reports that the DNA fragments carried by the Melanesian people are not from a Neanderthal or Denisovan lineage — our two most well-documented ancestors — and concludes that they must have come from a third, unknown relative.

“We’re missing a population, or were misunderstanding something about the relationships,” he said at the conference.

Neanderthals, whose genomes were sequenced in 2010, are our most recent extinct relatives, having disappeared about 30,000 years ago. The full DNA sequence of the lesser-known Denisovians, an offshoot of Neanderthals that existed around the same time, came later, in 2012. Knowing their genome sequences has allowed geneticists to spot the similarities and differences between the DNA of modern-day humans and their ancestral kin — as well as identify stretches of DNA that appear to be completely new.

So far, the scientists can’t tell whether the fragments of DNA discovered in the Melanesian people belongs to a previously undiscovered species or one whose genome has simply not been sequenced. It’s very likely that there are multiple branches we’ve yet to identify on our family tree — just take the head-scratching of a team of Danish evolutionary geneticists studying as an example. In a study similar to Bohlender’s, the scientists discovered unique fragments of Denisovan-like DNA in the genes of aboriginal people in Australia and Papua New Guinea, and conjectured that they could be anything from “Homo erectus” to even “Hobbits,” an extinct group of hominids once living in Indonesia.

What all of these discoveries don’t suggest, however, is that any group of modern humans descended from a single ancestral species. After all, the Homo sapiens genome is more patchwork than uniform, largely because our early human ancestors often attempted (and succeeded) to mate with their evolutionary cousins.

More like this
Science
6.23.2022 6:44 PM
Scientists discovered the biggest bacteria ever, and it’s the size of an eyelash
By Allison Parshall
Science
6.22.2022 8:26 PM
Yes, there are mites living on your face — and they can poop, a new study finds
By Allison Parshall
Science
6.27.2022 11:00 AM
Letting your cat go outside could spread “life-threatening” parasites — new research
By Amy Wilson, Scott Wilson and The Conversation
Related Tags
Share: