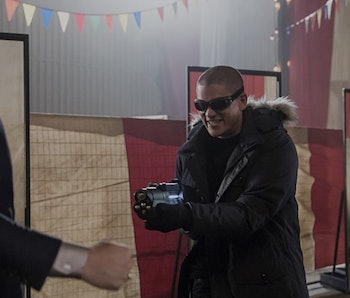 It says something about the “anything goes” nature of The Flash that the TV series put a psychic gorilla and a humanoid shark on the screen before it got around to the property’s more down-to-earth villains, like the guy who travels through mirrors and the lady who induces vertigo with her mind. Unlike other superhero shows, The Flash embraces fantasy, but it’s particular aesthetic doesn’t define the universe of the show. Some 70-plus years of DC Comics mythology do and in “The New Rogues,” the show’s 50th episode, our speedy hero faces two of his most stalwart comic book adversaries: the Top (Ashley Rickards) and Mirror Master (Grey Damon).

Mirror Master, aka Sam Scudder, is a flashy thief from Leonard Snart’s old crew who gained the power (the old fashioned way) to teleport from mirror to mirror, as well as the ability to trap his opponents inside of any reflective surface. After being lost in his own reverse-universe for two years in the wake of the S.T.A.R. Labs particle accelerator explosion, Sam returns at the start of “The New Rogues” and reunites with his best gal, Rosa Dillon (alias “The Top,” thanks to Cisco), who has the power to disorient her foes by looking them straight in the eyes. And it’s this potent combination of the Top and Mirror Master against the Flash and Jesse Quick that sets up this week’s key image.

It’s not an action scene. The big moment in this episode comes after Rosa sends Jesse reeling with her vertigo powers, which allows Sam to knock the Flash into a mirror. That later leads to a shot of Iris looking at her own reflection in the glass that Barry’s trapped in, asking if her pants make her butt look big, a funny line and one that prompts him to address, at long last, the sexual tension that’s been developing between them since they started dating. Here they are, these lifelong friends who are in the process of becoming something more … if only they can stop ending up on the opposite sides of supernatural barriers.

Lets face it: Barry and Iris have a weird romance. The downside to The Flash deviating the comic book to make Barry into Joe West’s ward is that his relationship with Iris — an essential part of the comics is now affected by the fact that they grew up together, in the same house, with the same guardian. Not until the two are separated by a mirror do they finally feel comfortable enough to talk through how their affair is sort of stuck — a lot like how the Flash is stuck, caught by Mirror Master’s mojo.

It’s very much true to the spirit of The Flash to use a situation as bizarre as a hero imprisoned in a mirror as a way to comment on something else — in this case the state of a love story. “The New Rogues does something similar with its one major subplot, which sees the Earth-2 Harrison Welles “fishing” for an alternate universe version of himself to help the S.T.A.R. team after he and Jesse head home. One one level, this is a fun idea, allowing the show to use all that it’s introduced over the past two years (the multiverse, the advanced technology, the overall oddness of Welles) to put something wild and geeky on TV. But at its root, this is also the tale of a man who has very few friends, trying to pick someone new to form a bond with. Like Barry in the mirror, Harry on a doppleganger-hunt is both hilarious and poignant.

As was the case last week, the main action in “The New Rogues” involves pretty straight-up superheroics, starting with a flashback to the origins of Mirror Master and the Top — complete with a cameo by Wentworth Miller as Leonard Snart — and ending with Barry and Jesse using a Captain Cold hologram to trick their opponents into a trap. For anyone who tunes in to The Flash to watch clever speedsters use their wits and their whoosh, these past two episodes have been a gift.

And for those more interested in the off-hours soap opera, this week’s Flash had more to offer than just Barry and Iris getting comfortable with the idea of getting it on. Joe flirts again with attorney Cecile Horton (but hesitates to close the deal when she asks him out on a date). Jesse and Wally too have a little “Will they or won’t they?” as she takes him for runs around Central City, before finally he decides that he’s okay with having a long-distance relationship with her. Really long-distance — between two universes.

No appearances in this episode by Julian Albert or Doctor Alchemy means no real movement in the season’s “Flashpoint” or “husk” storylines. Instead, the big subplot carrying over from earlier episodes involves Caitlin’s hidden Killer Frost powers, which she uses surreptitiously to help Barry get out of Mirror Master’s trap. “The New Rogues” ends with her stepping out of a chilly shower to see that her lips have turned blue and her hair is streaked with white. Perhaps even more concerning: At one point she says of Sam Scudder that he’s “a good looking guy … for a criminal.” It’s not just that the Killer Frost inside Caitlin is about to come out, but that she may be as inclined toward evil as her Earth-2 self.