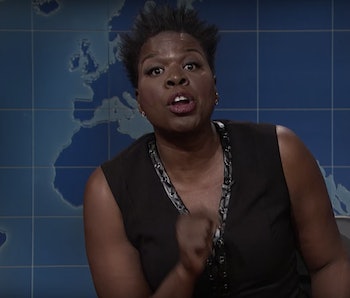 Leslie Jones is quickly becoming our favorite SNL actress for her technology-related roles. Last week she played a robot wrangler in a hilarious sketch on Honda’s ASIMO robot and this week she starred as herself as Weekend Update’s cybersecurity expert. After experiencing both Twitter terrorism this summer and a nasty hack, which resulted in the leak of her private nude photos, Jones finally used the show as a platform to clap back against her haters.

After 49 years, Jones insists the “only person that can hack me is me,” and that if internet trolls want to embarrass her, they’re out of luck. An unflappable and empowered comedian, it’s pretty inspiring to see Jones stand up against an internet culture that systematically abuses women.

The SNL star also had a few suggestions for how her trolls could better spend their time.

“If I was good at computers I wouldn’t waste it on trolling people. I would do something useful, like renew my driver’s license from home,” Jones said. “I would hack into Tinder and delete all those other girls’ profiles so no matter where you swipe, you get me.”

Jones would also use her computer skills to build “a perfect, masculine robot man.”

Now that’s an HBO show I actually want to watch. If Hillary Clinton is looking for a new cybersecurity advisor, we’d nominate Jones for the role in a heartbeat. Robot men with “perfect penises” sounds like a good way to distract from any future email scandals.

More like this
Entertainment
6.23.2022 11:30 AM
15 years ago, Bruce Willis made his most preposterous action thriller ever
By Vance Osteen
Entertainment
23 hours ago
Netflix may have deliberately spoiled a huge Stranger Things death
By Dais Johnston
Entertainment
1 hour ago
Marvel finally comments on the wildest Thanos theory from Avengers: Endgame
By Corey Plante
Share: