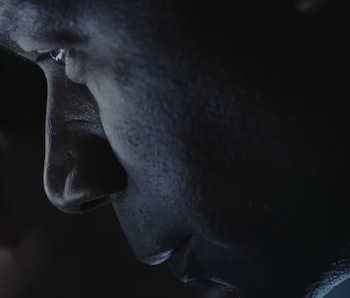 Betraying the corporate overlords has dire consequences in the Occupy-realized future of Incorporated, and it falls to Spiga’s Head of Security, Julian Morse, to make sure that company employees remain loyal and to ensure that those who are not loyal are thinned from the herd in a way that’s not exactly pleasant … or survivable.

In a new clip from Syfy’s Incorporated, we’re in the hot seat as Morse questions us about why we left the “green zone” — a cozy corporate-owned section of a city — to visit the “red zone” — an area that’s chaotic, resource-strapped, and dangerous. He doesn’t wait for answer but accuses us of being disloyal to Spiga and selling Spiga’s valuable IP and handing out info about Spiga’s R&D in “proprietary seed modification.”

There’s a hefty punishment for disloyalty, which we find out when another man enters the room and goes to work preparing to get to work, taking out an electric drill.

Things go from uncomfortable to fatal pretty quickly after that. Apparently that’s the price of secrets in a future that’s Incorporated. Don’t blame Morse for your misfortune, though — in his own words, he doesn’t make the rules, he just enforces them.

This is just a taste of the ruthlessness that were bound to witness in Incorporated. We know that the “red zones” are purportedly lawless places, but when corporate law is the only law, it’s hard to say which is the lesser of two evils. But lets be honest, it’s probably the red zone.

Incorporated premieres on Syfy on November 30.