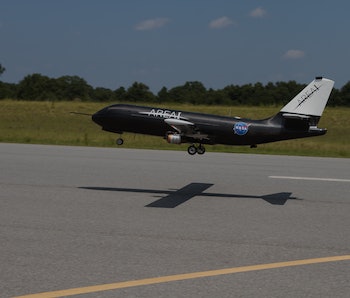 When you look out the window of an airliner and see the flaps moving up and down, you’re really watching the wing change shape. The flaps change the curvature of the top of the wing, altering the amount of lift generated. But NASA is planning to test out a new plane that will bend its wings in a completely different way for a smoother, and greener, flight.

The innovative wings won’t just have flaps to change the curvature, they’ll also have an entire section of the wing that can fold up or down, thanks to a sophisticated hinge. NASA engineers have developed a compact, lightweight solid-state actuator that can articulate the wingtips during flight

NASA will be using a special drone to test out these bendable wings, next spring. The Prototype-Technology Evaluation and Research Aircraft, or PTERA, is a modular UAV designed for testing out new aeronautical designs and technology. NASA can stick on the new articulating wings and test out the stability of the design in real flight conditions, not just in a wind tunnel.

Engineers want to bend wings for a reason: stability. Weather and speed can create highly variable conditions, and wings aren’t necessarily built to handle all of them. Moving the ends of a wing up or down can create more yaw stability, especially when flying at supersonic speeds.

Hinged wings can also be useful on the ground when planes have huge wingspans or space is tight, like on an aircraft carrier. An added benefit will be fuel savings. With lightweight actuators and less drag, aircraft with articulated wings will be more efficient.

NASA’s prototype isn’t the first aircraft to have hinged wings purely for stability. That honor goes to the XB-70 Valkyrie, an experimental supersonic bomber that NASA developed with the U.S. Air Force in the early 1960s. The wingtips were completely horizontal during takeoff and landing, and while the plane was flying at speeds under the sound barrier. At supersonic speeds, the wingtips were moved downward for stability, and to reduce drag from the wingtips interacting with the shockwave caused by the plane’s air intake inlets.

NASA might have also taken inspiration for a flying machine from much further back than the ‘60s, for its PTERA plane. Perhaps it looked to the pterosaurs: the first vertebrates to fly, also with wings that would bend slightly.