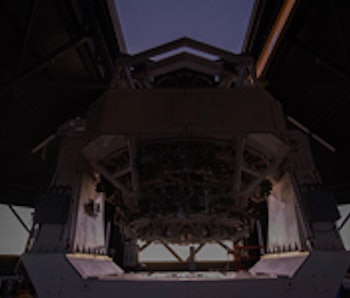 Looking at space junk is a chore, and the Defense Advanced Research Projects Agency doesn’t want to do it anymore. DARPA officially gave up the reins to its cutting-edge Space Surveillance Telescope (SST), designed to identify and track the movement of space debris orbiting the planet. In a rather beautiful-sounding mountaintop ceremony in New Mexico, on Tuesday, DARPA handed over formal control of the singular instrument to the United States Air Force Space Command, which will use it in collaboration with the Australian government.

Space junk frequently ends up trolling a lot of astronomers, space scientists, and conspiracy theorists. It often turns up false positives that seem to indicate the presence of something out there, when it is in fact merely a pile of literal garbage floating aimlessly around the planet. But there’s so much junk in Earth’s orbit — half a million literal bits and pieces — that it’s not just an annoyance, but actually a serious problem.

You don’t think about it much because you can’t see if from the ground, but the atmosphere is physically congested with this stuff: pieces of asteroids, debris from bygone space missions, and above all, defunct satellites that should be dead, but aren’t. They threaten to damage or destroy live satellites, distort radio signals, or even ‘fall’ out of orbit and kill us. Accordingly, the Department of Defense, and other entities, are putting increasing emphasis on monitoring space junk, as it’s become an issue of security.

The SST was built to do one thing — identify and track space junk — and do it better than any other instrument in the world. It incorporates the best in camera and imaging technology, so it excels at tracking this kind of small and hard-to-locate detritus, and can help prevent collisions between junk and satellites (or Earth, humans, etc.). It can view 10,000 objects at a time — according to DARPA, down to those just the size of a softball, even if they’re quite faint. It needs only a few seconds to search an area the size of the continental United States.

“Before SST, no single telescope could handle both of [these] challenges: seeing things that were very small, very faint, very far away, simultaneously, over an enormously vast area,” said SST program manager Lindsay Millard at the ceremony.

Air Commodore Sally Pearson, the director of General Surveillance and Control in the Royal Australian Air Force thanked DARPA and its partners for the use of the SST, joking about how she asked for additional room in her bag to begin bringing the pieces of it back to Australia.

More like this
Science
Jan. 25, 2023
NASA and DARPA want to build a nuclear-powered spaceship
By Kiona Smith
Science
Jan. 22, 2023
Supermassive black holes may be bigger and more powerful than we previously knew
By John Wenz
Science
17 hours ago
Scientists find two key ingredients for life in ancient meteors
By Jeff Nagle
LEARN SOMETHING NEW EVERY DAY.
Related Tags
Share: