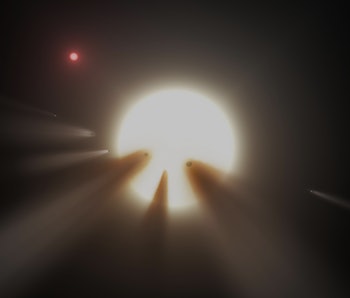 For the past year, researchers and journalists alike have been stoked, scared, and mystified by a bunch of weird light patterns coming from a star about 1,500 light years away. KIC 8462852, aka Tabby’s star, seemed to be dimming periodically, by as much as 20 percent — and for awhile the prevailing theory was that there was a gigantic alien megastructure orbiting the star. But now, it looks like there’s another, more plausible explanation: space junk.

A new paper argues that rather than massive alien satellites orbiting Tabby’s star, comets and planetoids are instead obscuring the star’s light periodically. The authors also point to a companion star, called E-companion, along the line of sight from NASA’s Kepler telescope that could be complicating our interpretation of the star’s light.

The alien megastructure theory was first suggested by astronomer Jason Wright last year, and the idea of other intelligent beings out there, one capable of building massive satellites to harness the energy of their sun, was pretty damn tantalizing.

Wright, Penn State University astronomer, suggested the irregular light reading might be a product of orbital megastructures, essentially massive alien satellites. Megastructures, Wright told Inverse in October, would be “very large” — and likely made of very thin materials to offset the constraints imposed by launching and controlling big objects. Wright’s suggestion was, in a sense, Occam’s Razor reasoning: Astronomical explanations couldn’t account for brightness dropping by a staggering 22 percent. To give a sense of just how extreme that number is, a planet the size of Jupiter would block about 1 percent of light — and planets don’t get much bigger than that.

When asked why he chose to study alien megastructures Wright was self-effacing about it, saying it was “mainly due to the fact that nobody else was doing it.”

Other explanations have been floated, but no conclusive data, or alien communications, could explain Tabby’s star’s dimming.

Comets and planetoids are the products of planet formation, and can be difficult to spot, especially if they’re not associated with a solar system. The authors of this new paper propose that “a large swarm of interstellar” comets and planetoids crossed the line of sight between us and the star. Those comets may even be orbiting another star that’s near that line of sight, but closer to us than Tabby’s star.

It’s still not a definitive explanation, and it may be awhile before we get one. One of the authors of the paper suggests waiting ten years for that companion star to move and then trying again. So settle in, because an answer is a long way off.

More like this
Science
Sep. 24, 2022
Super-Earths may be the best places to look for alien life
By Chris Impey and The Conversation
Science
Sep. 20, 2022
New study shows one of Saturn’s icy moons may be extremely habitable
By Kiona Smith
Science
16 hours ago
65 years ago, “simple satellite” Sputnik redefined space science — and sent a sinister message
By Allie Hutchison
Related Tags
Share: