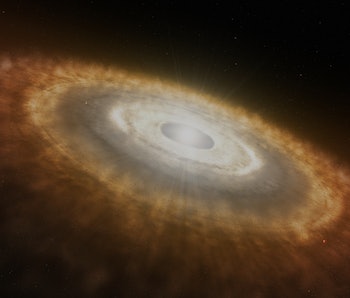 Last October, when a new study reported on the discovery of a new star exhibiting some really strange lighting effects, the world was like, “ALIENS DEFINITELY ALIENS.”

Star KIC 8462852, affectionally nicknamed “Tabby’s Star,” became a hot topic among the SETI community, because the strange dimming and brightening of the light was something astronomers had never before observed. Among the explanations put forth: intelligent aliens had built a series of megastructures orbiting the star system.

That sounds too crazy to be true, and after some more investigation, scientists indeed found out it was too crazy to be true. And yet, the activity around Tabby’s Star still made no sense — “We still don’t have a natural explanation for what is going on,” METI International astronomer Doug Vakoch told Inverse then.

The plot yet again thickens. A new study published to the arXiv repository found that Tabby’s Star dimmed to a degree never before observed, during the four years the Kepler Space Telescope was watching it. The findings only deepen the mystery behind what’s causing the star’s lighting to fluctuate so strangely.

In the new study — which, it should be emphasized has not been peer reviewed or formally published by a journal — a team of astronomers from around the country determine Tabby’s Star wasn’t simply dimming by up to 20 percent in certain instances, but its total brightness continuously went down over the entire four-year observation by Kepler. Overall, the star’s brightness went down by about 3 percent — a gigantic amount in such a short amount of time (remember that stars live for billions and billions of years — they don’t change this rapidly over the course of a single presidential election cycle).

The team parsed through data from over 500 stars in the surrounding area, and none of them behaved similarly to Tabby’s Star.

What gives? Nobody knows. The authors write in the paper: “We examine whether the rapid decline could be caused by a cloud of transiting circumstellar material, finding while such a cloud could evade detection in sub-mm observations, the transit ingress and duration cannot be explained by a simple cloud model.”

They add that “this model cannot account for the observed longer-term dimming. No known or proposed stellar phenomena can fully explain all aspects of the observed light curve.”

Obviously, the only thing that will solve this mystery is more research. Tabatha Boyajian, the woman who discovered the star and for whom the star is nicknamed after, recently completed a successful Kickstarter campaign to raise money for continued research of Tabby’s Star using the Las Cumbers Observatory Global Telescope Network. She’ll be watching the star for a whole year, and hopefully gathers enough data that will help point to a reasonable conclusion — be it aliens, or something less bizarre but no less exciting.

More like this
Science
8.2.2022 9:15 PM
Alien friendly? A nearby planet poses a vexing habitability puzzle
By Kiona Smith
Science
7.25.2022 1:30 PM
The Webb Telescope will drop everything to observe the next interstellar object
By Darren Orf
Science
7.27.2022 11:00 AM
The Webb Telescope might confirm if one of Saturn’s moons has ingredients for life
By Kiona Smith
Related Tags
Share: