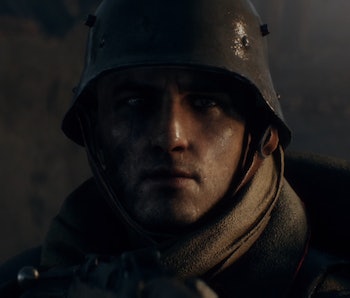 Melee combat is a significant part of modern first-person shooters, allowing players to finish their enemies off up close and personal with an array of knives, clubs, and axes. Battlefield 1 is no different, bringing an arsenal of melee weapons from World War I to the table. But DICE has taken the basic hack-and-slash mechanic of melee and added a few things to make it a little more refreshing. Here’s how it all works.

Melee weapons in Battlefield 1 now have both damage and stability. Damage determines the amount of — you guessed it — damage you can do with each swing, while stability determines how quickly you can use the weapon in combat after swinging it. So, smaller weapons like daggers and knives can be swung quickly for less damage, while larger weapons like shovels and axes swing slower but deal much more damage.

There’s a total of 14 melee weapons that we know of in Battlefield 1 currently, which can do anywhere between 40 and 80 points of damage to your enemies. Like before, sneaking up behind an enemy and hitting them with a melee attack will result in an instant kill, but thanks to the new damage values on all the melee weapons, you can also take out enemies from the front provided they do enough damage.

And then there’s the bayonet.

The bayonet allows you to charge at enemy players with your weapon raised and impale them for an instant kill. What’s great is that this principle applies to Elite classes as well, which means you can take out those pesky players running around with a flamethrower in one attempt if you surprise them from behind.

To perform a bayonet charge, you’ll have to have a bayonet on your current weapon. With one equipped, simply start sprinting at an enemy and hold down your melee key until you see a white circle pop up to stab them with your rifle. Keep in mind that you can’t charge forever, which is where the white circle comes into play. This circle determines how long you have until your bayonet charge ends and leaves you vulnerable to attack.

Obviously bayonet charges aren’t always effective, especially when you are charging strait at an enemy player with a gun in his or her hand. Most times during a head-on charge your opponent will be able to reload and kill you before you even get close to them, which is why you must play your charges smart.

Always remember to try and surprise your enemies with the bayonet charge. One great strategy is to anticipate enemy player movement around corners and then meet them head-on with a charge when they walk around it. You can always charge at enemies from behind as well, which, like regular melee, almost always works.